Inside the Red Box 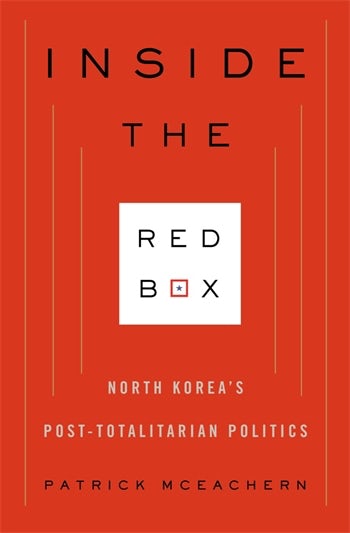 Inside the Red Box

Many scholars dismiss Kim Jong-Il's regime as a "one-man dictatorship," calling him the "last totalitarian leader," but McEachern identifies three major institutions that help maintain regime continuity: the cabinet, the military, and the party. These groups hold different institutional policy platforms and debate high-level policy options both before and after Kim and his senior leadership make their final call.

This method of rule may challenge expectations, but North Korea does not follow a classically totalitarian, personalistic, or corporatist model. Rather than being monolithic, McEachern argues, the regime, emerging from the crises of the 1990s, rules differently today than it did under Kim's father, Kim Il Sung. The son is less powerful and pits institutions against one another in a strategy of divide and rule. His leadership is fundamentally different: it is "post-totalitarian." Authority may be centralized, but power remains diffuse. McEachern maps this process in great detail, supplying vital perspective on North Korea's reactive policy choices, which continue to bewilder the West.

Working from North Korean media, Patrick McEachern shows that, whatever might have been the case under Kim Il Sung, North Korea under his son, Kim Jong Il, is not the unknowable and irrational totalitarian state presented by many commentators. Since the elder Kim's death in 1994, the country's political structure has evolved. The younger Kim is undoubtedly powerful but has neither his father's revolutionary credentials nor his personal charisma and does not always succeed in imposing his views. It is these policy debates that lie behind the apparent abrupt swings from engagement to non-engagement, not some inherent irrationality in the North Korean polity, and it pays to study them. This stimulating and well-written book does just that. It should be required reading for all those interested in or involved with North Korea. J. E. Hoare, School of Oriental and African Studies, University of London, and coauthor of North Korea in the Twenty-First Century

It is conventional wisdom that information on North Korea is hard to come by, but in fact, the opposite is true. Most researchers quickly find themselves drowning in information, and the real challenge is to make sense of the deluge of data and separate the wheat from the chaff. Patrick McEachern rejects easy routes and embraces the project of using sound social science methodologies to examine a mountain of primary sources. The result of his painstaking analysis is the illumination of domestic politics in Pyongyang-opening up the "red box." While McEachern's findings can be disputed, they cannot be ignored-this book is a must read for any serious student of North Korea. Andrew Scobell, Senior Political Scientist, RAND Corporation

...deserve to be added to the list of essential readings on the modern politics of North Korea... Marc Lanteigne, International Affairs

This is a brilliant book that should be read by anyone with an interest in Korean affairs. Survival

McEachern's book is a highly useful source for those interested in a comprehensive and nuanced overview of North Korean domestic and foreign policies in the Kim Jong Il era. Korean Studies

Patrick McEachern is a foreign service officer in Seoul supporting the Six Party Talks and a former North Korea analyst with the State Department's Bureau of Intelligence and Research. His publications have appeared in Asian Survey, Journal of East Asian Studies, and Korea Yearbook.