New Yorkers on the 7 Train 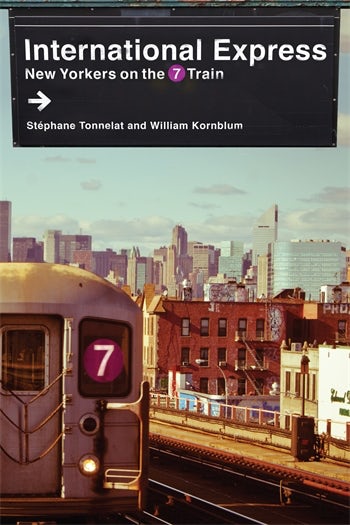 New Yorkers on the 7 Train

Nicknamed the International Express, the New York City Transit Authority 7 subway line runs through a highly diverse series of ethnic and immigrant neighborhoods in Queens. People from Andean South America, Central America, China, India, Italy, Korea, Mexico, Pakistan, Poland, Romania, and Vietnam, as well as residents of a number of gentrifying blue-collar and industrial neighborhoods, fill the busy streets around the stations. The 7 train is a microcosm of a specifically urban, New York experience, in which individuals from a variety of cultures and social classes are forced to interact and get along with one another. For newcomers to the city, mastery of life in the subway space is a step toward assimilation into their new home.

In International Express, the French ethnographer Stéphane Tonnelat and his collaborator William Kornblum, a native New Yorker, ride the 7 subway line to better understand the intricacies of this phenomenon. They also ask a group of students with immigrant backgrounds to keep diaries of their daily rides on the 7 train. What develops over time, they find, is a set of shared subway competences leading to a practical cosmopolitanism among riders, including immigrants and their children, that changes their personal values and attitudes toward others in small, subtle ways. This growing civility helps newcomers feel at home in an alien city and builds what the authors call a "situational community in transit." Yet riding the subway can be problematic, especially for women and teenagers. Tonnelat and Kornblum pay particular attention to gender and age relations on the 7 train. Their portrait of integrated mass transit, including a discussion of the relationship between urban density and diversity, is invaluable for social scientists and urban planners eager to enhance the cooperative experience of city living for immigrants and ease the process of cultural transition.

As a lifelong resident of Flushing and a lifelong rider of the Flushing line, I'm absolutely thrilled about this new book. Tonnelat and Kornblum have become one with the 7, a gritty transit spoke that for generations has doubled as a lifeline as it meanders seemingly halfway around the world right through a dozen neighborhoods in Queens. John Liu, former New York City comptroller and councilman

A wonderful journey on the 7 train with Tonnelat and Kornblum providing a detailed picture of the subway community in transit. Filled with fascinating stories and analyses of gender relations, ethnic diversity, and social order underground, this well-written and insightful book will be a delight for anyone who rides or is curious about the world of the New York City subway. Nancy Foner, editor of One Out of Three: Immigrant New York in the Twenty-First Century

International Express offers a richly detailed portrait of interethnic, gendered, and age-specific relationships as lived in the everyday practice of urban life. By focusing their microsociology on the 7 train and Jackson Heights' famously international immigrant population, Tonnelat and Kornblum reveal a protean paradox: the intimate interpersonal challenges of negotiating one's way through a social world of tightly confined strangers is key to the dynamic creativity of the contemporary city. Jack Katz, University of California, Los Angeles

What a pleasure it was to read this book! International Express is a tour through a central vein in what is perhaps the most essentially American city, from midtown offices through a variety of immigrant and native-born neighborhoods with different ethnic, religious, and socioeconomic makeups. It is a treat to walk through the subway with Tonnelat and Kornblum and see our shared life through their keen eyes. Robert Smith, School of Public Affairs, Baruch College, and Graduate Center, City University of New York

Through their study of the subway system as a microcosm of a diverse society, Tonnelat and Kornblum make a significant contribution to urban studies. Publishers Weekly

This work will be of greatest interest to students, scholars, and practitioners of urban planning, urban studies, and urban sociology. The book is quite accessible, however, and not laden with overly theoretical language. For this reason, it also may be of interest to more general readers with an interest in urban studies and related issues. Highly recommended. Choice

By the end of this intellectual ride, the authors ultimately succeed in identifying and evaluating how the time, space and perceptions of the subway interrupt and define multitudes of city-dwellers in the ‘Big Apple’. Jeff Roquen, LSE Review of Books

International Express will be of interest to urban sociologists, notably for its breadth of data sources and consideration of an urban social order. City & Community

Acknowledgments
1. Becoming New Yorkers on the 7 Train
2. Coping with Diversity Aboard the "International Express"
3. Walking to the Stations, Code Switching, and the I-We-You Shift
4. The 74th Street/Roosevelt Avenue Station: Universalism, Differentiation, and Discrimination
5. Trust in the Subway: Exploring the Situational Community in Transit
6. Gender Relations on the Subway
7. Teenagers on the 7 Train
8. Subway City: The 7 Train as an Engine of Urbanism
9. A World of Subway Citizens
Appendix: Mixed Methods in Subway Research
Notes
Bibliography
Index

Read an excerpt of the first chapter of INTERNATIONAL EXPRESS: NEW YORKERS ON THE 7 TRAIN. How the New York City subway helps new immigrants assimilate.

Stéphane Tonnelat is an ethnographer with the Centre national de la recherche scientifique (CNRS) at the LAVUE research center, Université Paris Nanterre, and coeditor of the online journal Métropolitiques/Metropolitics (metropolitiques.eu). He is the author of L'art en chantier (2016).

William Kornblum is professor of sociology emeritus at the Graduate Center, City University of New York (CUNY). His books include Blue Collar Community (1975), At Sea in the City: New York from the Water's Edge (2002), and Sociology in a Changing World (2011, ninth edition).