Lessons from the Plaza Accord after Thirty Years

Edited by C. Fred Bergsten and Russell A. Green 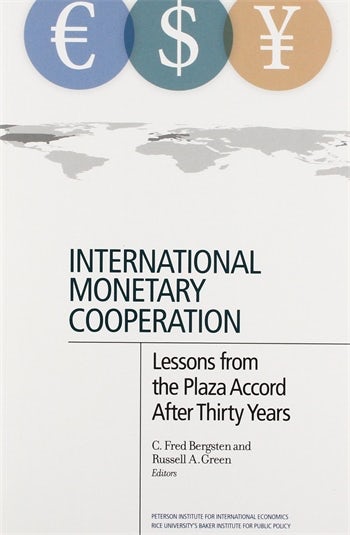 Lessons from the Plaza Accord after Thirty Years

Edited by C. Fred Bergsten and Russell A. Green

In September 1985, emissaries of the world's five leading industrial nations—the United States, Britain, France, Germany, and Japan—secretly gathered at the Plaza Hotel in New York City and unveiled an unprecedented effort to correct the largest set of current account and exchange rate imbalances that had ever threatened the world economy. The Plaza Accord is credited with sharply realigning exchange rates, significantly reducing current account imbalances, and countering protectionist pressures in the United States. But did the Accord provide a foundation for ongoing international financial stability and policy coordination? Or was it simply a unique one-time coincidence of national interests?

The Plaza experience continues to inform today's debates about the limits and possibilities of international monetary cooperation. In late 2015, leading policymakers and economists—including those who were involved in the Accord's design, negotiation, and implementation—held a Plaza Retrospective conference at the Baker Institute for Public Policy to evaluate the Accord's legacy and how its collaborative spirit can be applied today. This volume presents their views and analyses to provide guidance for a time when the world again faces the prospect of currency disequilibria, growing imbalances, trade policy reactions, and thus uncertainty for both the global economy and world politics.

Data disclosure: The data underlying the analysis in this volume are available. The data used in chapter 14 are taken directly from William Cline's Policy Briefs 15-8 and 15-20, with the exception that they have been manipulated with a key assumption stated in the chapter.

C. Fred Bergsten, senior fellow and director emeritus, was the founding director of the Peterson Institute for International Economics (formerly the Institute for International Economics) from 1981 through 2012. He is serving his second term as a member of the President's Advisory Committee for Trade Policy and Negotiations and was co-chairman of the Private Sector Advisory Group to the United States–India Trade Policy Forum, comprising the trade ministers of those two countries, during 2007–14.

Russell A. Green is the Will Clayton Fellow in International Economics at Rice University's Baker Institute and an adjunct assistant professor in the economics department there. His current research focuses on exchange rate policies, financial market development in emerging-market economies, and India's development challenges. Prior to joining the Baker Institute, Green spent four years in India as the US Treasury Department's first financial attache to that country. He was previously the deputy director of the US Treasury's Office of International Monetary Fund exchange rate policies and international reserve management.