The Stories We Tell Ourselves About Life After Death 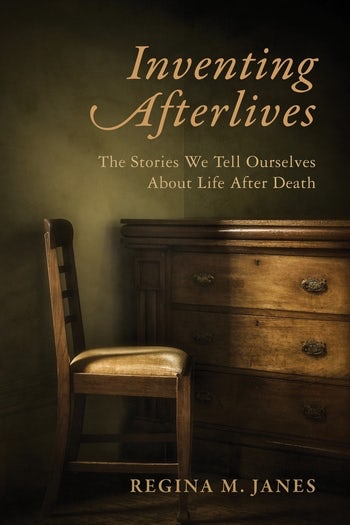 The Stories We Tell Ourselves About Life After Death

Why is belief in an afterlife so persistent across times and cultures? And how can it coexist with disbelief in an afterlife? Most modern thinkers hold that afterlife belief serves such important psychological and social purposes as consoling survivors, enforcing morality, dispensing justice, or giving life meaning. Yet the earliest, and some more recent, afterlives strikingly fail to satisfy those needs.

In Inventing Afterlives, Regina M. Janes proposes a new theory of the origins of the hereafter rooted in the question that a dead body raises: where has the life gone? Humans then and now, in communities and as individuals, ponder what they would want or experience were they in that body. From this endlessly recurring situation, afterlife narratives develop in all their complexity, variety, and ingenuity. Exploring afterlives from Egypt to Sumer, among Jews, Greeks, and Romans, to Christianity’s advent and Islam’s rise, Janes reveals how little concern ancient afterlives had with morality. In south and east Asia, karmic rebirth makes morality self-enforcing and raises a new problem: how to stop re-dying. The British enlightenment, Janes argues, invented the now widespread wish-fulfilling afterlife and illustrates how afterlives change. She also considers the surprising afterlife of afterlives among modern artists and writers who no longer believe in worlds beyond this one. Drawing on a variety of religious traditions; contemporary literature and film; primatology; cognitive science; and evolutionary psychology, Janes shows that in asking what happens after we die, we define the worlds we inhabit and the values by which we live.

This engaging and thought-provoking book has a capacious range that includes those who believe there is no afterlife and spans time from the ancient Greeks and Egyptians to our current scientific, psychological, and religious thinking about what we imagine—or hope—happens after death. Paula R. Backscheider, Philpott Stevens Eminent Scholar, Auburn University

Regina Janes has written a brilliant, inquisitive, polymath essay to explain why the afterlife required inventing and what the results may show about the diversity and consistency of human nature. For adventurous wit on a forbidding terrain, this book has no precedent and will allow no imitator. David Bromwich, Yale University

Inventing Afterlives is an intensively researched and brilliant book. The question of what humans have made of the afterlife is fascinating and Janes, who knows more about this subject than any scholar living (or, dare I say it, dead), has achieved something like completeness in her survey of the material. Blakey Vermeule, Stanford University

Regina Janes’ Inventing Afterlives is a breezy but well-informed romp through the ages as cultures from those of primitive humans to those of the digital age do what the title of this manuscript states, invent afterlives, telling their members what to expect, or, as in our own age, telling them what cannot happen even if the space or site of the afterlife gives writers a perfect setting to stage righteous justice or cynical evasion. Daniel T. O'Hara, Temple University

There is no doubt that Janes’ book will be of interest to scholars of religion, particularly those who focus on the areas of death and immortality studies, religion and literature, and religion and popular culture since it contains a cache of literary and cinematic references. Cynthia A. Hogan, Reading Religion

This book, which travels time and disciplines, cannot be ignored. Scholars and students of sociology, anthropology, religion, and cultural history will find Inventing Afterlives particularly useful for developing new approaches to conceptualizing and interrogating beliefs in the hereafter. Janes’s study strips away theological and anachronistic understandings about belief in life after death, leaving us with a productive framework with which to question the validity of both our own assumptions about the afterlife and those of other scholars. Camille Grace Leon Angelo, Religious Theory

Regina M. Janes is professor of English at Skidmore College. Her books include Gabriel García Márquez: Revolutions in Wonderland (1981); One Hundred Years of Solitude: Modes of Reading (1991); and Losing Our Heads: Beheadings in Literature and Culture (2005).