The Army, Business, and Revolution in Egypt 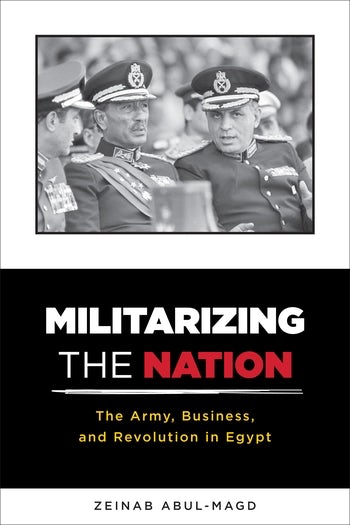 The Army, Business, and Revolution in Egypt

Egypt's army portrays itself as a faithful guardian "saving the nation." Yet saving the nation has meant militarizing it. Zeinab Abul-Magd examines both the visible and often invisible efforts by Egypt's semiautonomous military to hegemonize the country's politics, economy, and society over the past six decades. The Egyptian army has adapted to and benefited from crucial moments of change. It weathered the transition to socialism in the 1960s, market consumerism in the 1980s, and neoliberalism from the 1990s onward, all while enhancing its political supremacy and expanding a mammoth business empire. Most recently, the military has fought back two popular uprisings, retained full power in the wake of the Arab Spring, and increased its wealth.

While adjusting to these shifts, military officers have successfully transformed urban milieus into ever-expanding military camps. These spaces now host a permanent armed presence that exercises continuous surveillance over everyday life. Egypt's military business enterprises have tapped into the consumer habits of the rich and poor alike, reaping unaccountable profits and optimizing social command. Using both a political economy approach and a Foucauldian perspective, Militarizing the Nation traces the genealogy of the Egyptian military for those eager to know how such a controversial power gains and maintains control.

No other work provides such a detailed account of the military's penetration of the economy or the state administration, nor of the causes or consequences of that penetration. The topic is of major importance and the range of sources drawn upon is without parallel. Robert Springborg, author of Mubarak's Egypt: Fragmentation of the Political Order

The insidious connection between saving and militarizing the nation is the subject of this fascinating investigation of Egypt's current travails. Abul-Magd offers an impressive and meticulously documented account of this bleak process, from the establishment of military dominance in 1952 to its resurgence after 2011, and concludes with prescriptions on how to reverse it. Militarizing the Nation is essential reading for those lamenting the fate of the 2011 Arab revolts. Hazem Kandil, University of Cambridge

Abul-Magd has written an empirically-rich and thoughtfully organized book. By capitalizing on many newly-available sources of information and contextualizing this in a broader theoretical literature on militarization, she has made the otherwise opaque subject of Egyptian military politics into a comprehensible case study. This text will be useful to students of Middle East politics but also to comparativists interested more broadly in political economy and critical military studies. Shana Marshall, George Washington University

A must-read...Unlike the flurry of publications after January 2011 that viewed the Egyptian military from the outside as a black box making crucial decisions (i.e. to let Mubarak fall and then govern, and then to deal with and later topple the Muslim Brotherhood), this book provides more context. It describes how the Egyptian army, especially after the 1980s, managed to entrench itself in the state apparatus, the economy (even during times of privatization), and society. This book supersedes all previous empirical works in this area of study. It is essential reading for anyone who wants to understand the decisions of the Egyptian military after 2011, and the enduring weight of these actions. Philippe Droz-Vincent, Middle East Institute

Essential reading for anyone interested in the contemporary Egyptian military state. Choice

As a social and institutional history of the Egyptian military, the book collects an unparalleled range of materials and wealth of details. The American Historical Review

Zeinab Abul-Magd is associate professor of Middle Eastern history at Oberlin College. She is the author of Imagined Empires: A History of Revolt in Egypt (2013) and coeditor of Businessmen in Arms: How the Military and Other Armed Groups Profit in the MENA Region (2016).