"It's the Pictures That Got Small" 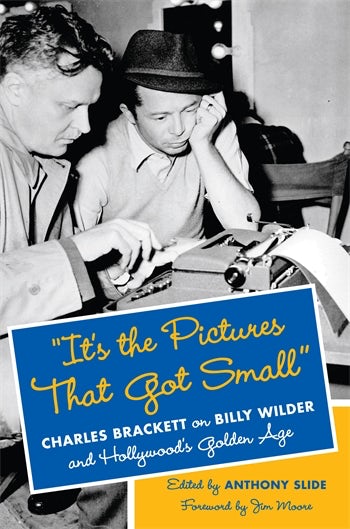 "It's the Pictures That Got Small"

Golden Age Hollywood screenwriter Charles Brackett was an extremely observant and perceptive chronicler of the entertainment industry during its most exciting years. He is best remembered as the writing partner of director Billy Wilder, who once referred to the pair as "the happiest couple in Hollywood," collaborating on such classics as The Lost Weekend (1945) and Sunset Blvd (1950).

In this annotated collection of writings taken from dozens of Brackett's unpublished diaries, leading film historian Anthony Slide clarifies Brackett's critical contribution to Wilder's films and Hollywood history while enriching our knowledge of Wilder's achievements in writing, direction, and style. Brackett's diaries re-create the initial meetings of the talent responsible for Ninotchka (1939), Hold Back the Dawn (1941), Ball of Fire (1941), The Major and the Minor (1942), Five Graves to Cairo (1943), The Lost Weekend, and Sunset Blvd, recounting the breakthrough and breakdowns that ultimately forced these collaborators to part ways.

Brackett was also a producer, served as president of the Academy of Motion Picture Arts and Sciences and the Screen Writers Guild, was a drama critic for the New Yorker, and became a member of the exclusive literary club, the Algonquin Round Table. Slide provides a rare, front row seat to the Golden Age dealings of Paramount, Universal, MGM, and RKO and the innovations of legendary theater and literary figures, such as Alfred Lunt, Lynn Fontanne, Edna Ferber, and Dorothy Parker. Through Brackett's keen, witty perspective, the political and creative intrigue at the heart of Hollywood's most significant films comes alive, and readers will recognize their reach in the Hollywood industry today.

Charles Brackett was an outstanding writer and producer of his era. Like him, I have served as the president of the Academy of Motion Picture Arts and Sciences, and also like him, I had had a long association with Billy Wilder. I am therefore delighted that Charlie's diaries are being published, providing us with his unique insight into Billy and Hollywood's golden age. Walter Mirisch

Reading Charles Brackett's diary entries is like stepping into a time machine. It provides a vivid and valuable account of day-to-day life in the heyday of Hollywood's studio system—and a bittersweet chronicle of his volatile relationship with Billy Wilder. I couldn't put the book down. Leonard Maltin

Charlie would often talk about his diaries as I worked with him and Billy Wilder on the screenplay of. I am thrilled that those diaries are now published and gratified to be a part of them. Donald M. Marshman Jr.

Charlie was always very kind and friendly to me and I very much look forward to the publication of his diaries. Don Bachardy

This is a book I was literally unable to put down once I began reading it, and I suspect everyone with a reverence for Hollywood in its glory days will feel the same. Here is a rare chance to read what was going on in Charles Brackett's mind and his world while he made so many of the movies we revere so highly today. Robert Osborne, Primetime host of Turner Classic Movies

Anyone interested in the golden age of film should enjoy this very entertaining and illustrative look at the film industry of the 1930s and 1940s. Library Journal

Above all, "It's the Pictures That Got Small" is an indispensable guide to the complex, increasingly awkward relationship between two men who had next to nothing in common and yet contrived to make a fair number of the studio system's finest films. Commentary

Brackett's 1932-49 dispatches from Hollywood's front line, are crammed with sugar-free, often salty observations. The author's honesty is certified by the fact that he can admire a man one minute and put him down the next. When that man is Billy Wilder, which it often is, the result is a day-by-day, year-on-year, pointilliste portrait of a sacred monster, warts and all. Frederic Raphael, Wall Street Journal

Charles Brackett has always lived in the shadow of his high-profile writing partner, Billy Wilder. This valuable compendium of diary entries from 1933 to 1950, painstakingly edited by Anthony Slide, not only sheds light on that renowned collaboration but evokes the reality of daily life in the heyday of the Hollywood studio system. Leonard Maltin, Indiewire

What we see in this volume is a writer much like Joe Gillis in Sunset Boulevard. At the end of a long day spent negotiating titanic egos, he simply wants to sit down and write the thoughts that race through his head like a dozen locomotives. James Hughes, Film Comment

"It's the Pictures That Got Small": Charles Brackett on Billy Wilder and Hollywood's Golden Age edited by Anthony Slide, offers not only rare insight into their often-stormy partnership but also an insider's view of Hollywood during that era. Susan King, Los Angeles Times

["It's the Pictures That Got Small"] reveals the conflicts that led to some of the best pictures of the last century. Robert Fulford, National Post

An absorbing chronicle of a tempestuous collaboration and the lifestyles of an era.... "It's the Pictures That Got Small" is a plump album packed with tiny but revealing snapshots. David Bordwell, Observations on Film Art

Fascinating passages are lightly sprinkled throughout.... The accounts of how Sunset Boulevard arrived on screen in its finished form are among the most entertaining in Brackett's diaries. David Gritten, The Daily Telegraph

Brackett's book is a fascinating look at Hollywood in its classic period, and a unique and indispensable must-have for any movie buff. Tom Moran, Chicago Tribune

The diaries give us a view of Brackett, Wilder, the collaboration, and life at the studio with an immediacy that memoirs don't have. Tom Stempel, Creative Screenwriting

This superbly edited and annotated book is a worthy testimony to a troubled individual in an industry he unjustly denigrated but which he undoubtedly enriched. Neil Sinyard, Neil Sinyard on Film

This view from deep inside the studio system at its height is one of the best books ever about Hollywood, as well one of the finest on writing in years. Black Mask

A fascinating look into the Golden Age of Hollywood from an insider's personal, unbiased point of view.... It's the Pictures That Got Small will find a permanent spot on many a film buff's bookshelf. Christopher Forsley, PopMatters

What is possibly most fascinating about the book is its insight into the operation of Hollywood in the golden years of the studio system. Douglas Allen, Media Education Journal

Slide has culled from Brackett's voluminous diaries a treasure trove of scenes and wit from Golden Age Hollywood.... A book to be skimmed and referenced—but primarily relished.... Recommended. CHOICE

The book is packed with revealing cameos from some of the greatest names of Hollywood's greatest era, and is a valuable record of the texture of life there in those years. Henry K. Miller, Sight and Sound

While anecdotes... sustain readers across almost four hundred pages of diary entries, their value to scholars and historians lies in the ways they exemplify the daily working life of writers in the studio system. Mary Desjardins, Film Quarterly

A collection of Charles Brackett's diaries, expertly edited by Anthony Slide to paint a multifaceted portrait of Brackett's long-term collaborator Billy Wilder. This feels as close as we can get to being in the presence of Wilder's genius, and he emerges as the cruellest as well as the wittiest of men. Jonathan Coe, The Guardian

Anthony Slide is the author or editor of more than two hundred books on the history of popular entertainment. He has served as both associate archivist of the American Film Institute and as resident film historian of the Academy of Motion Picture Arts and Sciences. His most recent publications include Silent Players: A Biographical and Autobiographical Study of 100 Silent Film Actors and Actresses; Inside the Hollywood Fan Magazines: A History of Star Makers, Fabricators, and Gossip Mongers; and Hollywood Unknowns: A History of Extras, Bit Players, and Stand-Ins.