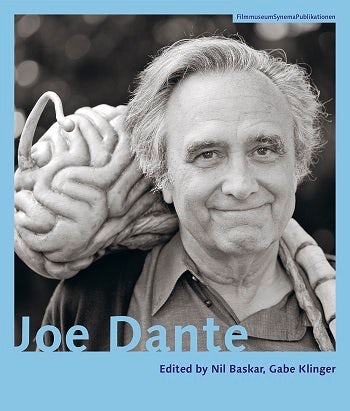 In the often dreary landscape of Hollywood's blockbuster era, the cinema of Joe Dante has always stood out as a rare beacon of fearless originality. Blending humor with terror and trenchant political satire with sincere tributes to the moviegoing act itself, the "Dante touch" is best described as a free-for-all orgy of movies, memories and mischief. For the first time, this colourful universe—from Hollywood Boulevard to Gremlins to Small Soldiers and beyond—is comprehensively explored in an English language volume featuring a career-encompassing interview, new essays by Michael Almereyda, Jim Hoberman, Christoph Huber, Gabe Klinger, Violeta Kovacsics, Bill Krohn, Dušan Rebolj, John Sayles, and Mark Cotta Vaz, as well as a treasure trove of never-before-seen documents and illustrations.

The pleasure of reading a book such as this lies in its built-in appeal both to fans and newcomers... Absorbing... Cineaste

Baskar and Klinger's volume is especially triumphant in light of Joe Dante's continued disreputability within the world of serious film discourse... It can only be hoped that there will be many more publications like it to follow. Film Matters

Joe Dante makes a convincing case that its subject, despite never taking screenplay credit, has through his choice and interpretation of materials – and what he's done with projects which have landed in his lap – managed to maintain a clear authorial voice while compiling a varied corpus. The volume is, therefore, not only paradise for Dante acolytes, but an excellent choice for anyone wondering how talented practitioners can carve a career in a purgatorial medium which for more than a century has thrown art and commerce together as perhaps the most infernally stormy of bedfellows. Tribune Magazine

A glance at the contents page suggests that this is primarily a collection of essays, although these only tape up 100 pages in the mid-section. Bookending them are a lenghty, delightfully candid conversation with Dante conducted by co-editor Gabe Klinger that's the closest we currently have to a full-blown autobiography, a detailed timeline of his life and career, and a comprehensive annotated filmography. In short, it does an admirable job as a single-volume overview. Sight & Sound

Nil Baskar is a film writer, researcher and translator based in Ljubljana. In 2007, he confounded KINO! magazine and has been a regular contributor since. He is in charge of in-house publications for the Slovenian Cinematheque. He has edited and translated books by André Bazin, Jacques Rancière and Jean-Louis Comolli, among others.

Gabe Klinger is a critic, teacher, archivist, curator, and filmmaker. His articles have appeared in Sight & Sound, Film Comment, Cinema Scope, and other publications. His feature documentary, Double Play: James Benning and Richard Linklater (2013), premiered at the 2013 Venice Film Festival.