Cooperation with Europarties and Its Impact on Party Development in Georgia, Moldova, and Ukraine 2004–2015 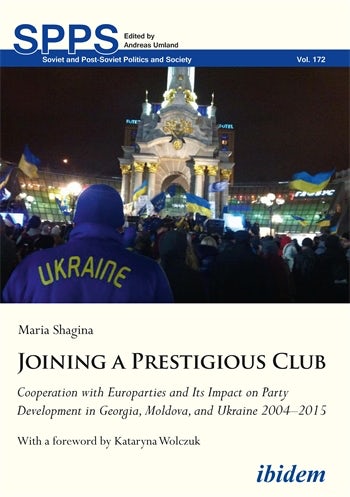 Cooperation with Europarties and Its Impact on Party Development in Georgia, Moldova, and Ukraine 2004–2015

Brussels's idea of a "wider Europe" implies that Europeanization is not limited to EU member states. The EU can, so it claims, also exert influence beyond its borders. One of the channels of external EU influence is cooperation between Europarties and parties outside the Union. Through mutual visits and joint activities, non-EU parties become internationally socialized, that is, exposed to the Europarties' norms as well as values, and experience the rules as well as practices that shape European party-building. What are the incentives for Europarties and non-EU parties to cooperate with each other? What kind of, and how much, impact did cooperation have on party development in post-Soviet Georgia, Moldova, and Ukraine?

Based on eighty interviews with party officials, international donors and academics, Maria Shagina outlines the set of motivations that trigger cooperation between Europarties and non-EU parties, analyzes the impact of cooperation on party ideology, organizational structure, and interparty behavior in Georgia, Moldova, and Ukraine, and explores the implications of this cooperation on the standardization, consolidation, and democratization of the non-EU party systems. Her findings shed light on how prestige and domestic factors impede the penetration of EU norms and values in the non-EU party structures, and point to the failures of Europarties to adequately address problems of party-development in Eastern Europe. The book reveals the ways in which cooperation with Europarties has paradoxically contributed to the ossification of the status quo and impaired the development as well as the consolidation of democracy in the three Eastern Partnership states.

Europarties are the virtually unseen 'agents of Europeanization', theoretically spreading the EU's norms and values and helping consolidate party and party system identity. In practice, even within the EU's core states, they have struggled to play this role consistently, and their actual impact has been controversial. Their role in the EU's Eastern neighborhood is still less visible, but arguably no less important or controversial, in terms of whether they help the Europeanization and integration of the EU neighborhood's party actors. Joining a Prestigious Club is a thoroughly researched and forensic study of the Europarties' role in Georgia, Moldova, and Ukraine, and shows how the Europarties remain important mechanisms of socialization despite their lack of obvious leverage. This is an enthralling and complex study that is a must for scholars of EU integration and Eastern European politics. Luke March, University of Edinburgh, and deputy director of the Dashkova Centre

An important and pioneering analysis of the rapprochement between Europarties and political parties in Georgia, Moldova, and Ukraine. It breaks new ground by offering the first comparative analysis of these interactions and by offering a careful conceptualization of their different levels and potential effects. Sandra Lavenex, University of Geneva, Vice-Dean of the School of Social Sciences

3. Understanding the Context of Cooperation
3.1 Historical and Institutional Development of the Europarties
3.2 Party Development in Post-Communist Countries

Maria Shagina studied political science at the Universities of Lucerne, Zurich, and Birmingham as a fellow of the Swiss National Science Foundation. Her articles have appeared in the Central European University Political Science Journal, the open access journal Euxeinos: Governance and Culture in the Black Sea Region, and in the UNISCI Discussion Papers series.