Edited with an introduction by Wiesław Krajka 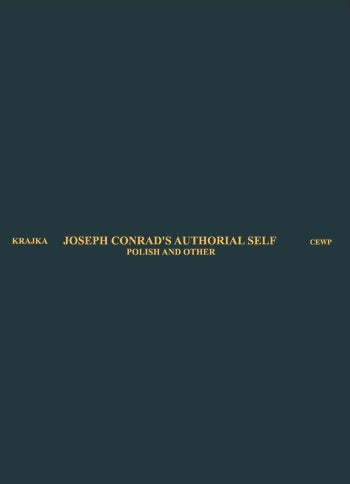 Edited with an introduction by Wiesław Krajka

Joseph Conrad’s Authorial Self is organized around the category of the author with some illuminating aspects of Conrad’s Polishness as the major area of consideration. It starts with a theoretical treatment of Conrad’s authorship, continues through a focus on autobiography along with his creative process, proceeds with analyses of his ideas derived from his Polish heritage as presented in his personality and oeuvre, and moves on to biographies of the writer’s relatives. This set is followed by papers on “Amy Foster,” a short story of strong Polish resonance and a classic of émigré literature, considerations of translations of his works into Polish, and essays on central/south-central Europe and the sea.

The main integrative concept of authorial self is supported by two secondary principles: delimitation by the geographical area covered: mainly Poland, but also Russia and central and south-central Europe, and the chronology of Joseph Conrad’s life and works, from influences upon Konradek in Lwów and the significance of East Carpathian poetics to juxtapositions of his oeuvre with early twentieth century authors as well as a contemporary Polish author and translations of his works. The final five papers span the whole period studied in this volume, from the first Polish translation published in 1897 to one of the most recent in 2011, from possible influences upon Conrad in his childhood and youth to the most recent reception of his works in the Balkans.

This book is volume 27 of the series Conrad: Eastern and Western Perspectives, edited by Wiesław Krajka.
Wiesław Krajka: Introduction
Nathalie Martinière: Like a Damaged Kaleidoscope: Multiple Contemporary Images of Joseph Conrad
Richard Ambrosini: A Memoir “in the shape of a novel”: Making the “still voice” of Conrad’s Polish Past Resonate in A Personal Record
G. W. Stephen Brodsky: Anchors and Mirrors: Joseph Conrad’s Polonism Encoded
Harold Ray Stevens: “A tall cross much out of the perpendicular”: Some Christian Contexts in Conrad’s Life, Letters, and “Heart of Darkness”
Lilia Omelan: “A Man of Great Heart and Devotion”: Antoni Syroczynski and His Role in Young Konrad’s Education
Lilia Omelan: Leon Syroczynski: a Patriot, an Insurgent, a Scholar, and His Connections to Conrad
Anna Brzozowska-Krajka: Conrad’s Borderland (Kresy) Regionalism from the Perspective of Geopoetics. The Case of “Amy Foster
Wiesław Krajka: Between Mental Spaces of the Self and the Other in “Amy Foster”: Dialogue of Cultures and Values? Alterity? Hospitality?
Carl Schaffer: “They ain’t where they belong to be at”: Conrad’s and O’Connor’s Displaced Poles
Monika Majewska: “a somewhat discredited sentiment”? Conrad, Tolstoy and Zdziechowski on Patriotism
Rafał Szczerbakiewicz: “Close-hauled points of sail and fore topmast upper staysails in space.” Stanisław Lem and Joseph Conrad
Ewa Kujawska-Lis: Conrad’s Introduction to the Polish Literary Scene: Wygnaniec (1897) (An Outcast of the Islands) by Maria Gasiorowska
Agnieszka Adamowicz-Pospiech: A Set of Three: Polish Versions of Joseph Conrad’s “Il Conde”
Olga Binczyk and Grzegorz Gwózdz: Imagining the Never-Experienced: Aniela Zagórska’s and Magda Heydel’s Translations of “Heart of Darkness”
Majda Šavle: Two Poles on the High Seas or How (not) to Circumvent a “Typhoon”
Margreta Grigorova and Petya Tsoneva: Perspectives on the Contemporary Bulgarian Cultural Space: Conrad, Bulgarians and the Sea
Index of Non-Fictional Names
Index of Conrad’s Works and Letters

Wiesław Krajka is a professor in the English Department at Maria Curie-Skłodowska University in Lublin, Poland, and Jan Kochanowski University in Kielce, Poland. His research interests cover English nineteenth- and twentieth-century literature (especially Joseph Conrad), literary theory, and comparative literature. He is the author of Isolation and Ethos: A Study of Joseph Conrad (1992) and editor of “Wine in Old and New Bottles”: Critical Paradigms for Joseph Conrad (2014), among others, and editor of the series Conrad: Eastern and Western Perspectives, published by Maria Curie-Skłodowska University Press.