Legitimating News in the Digital Era 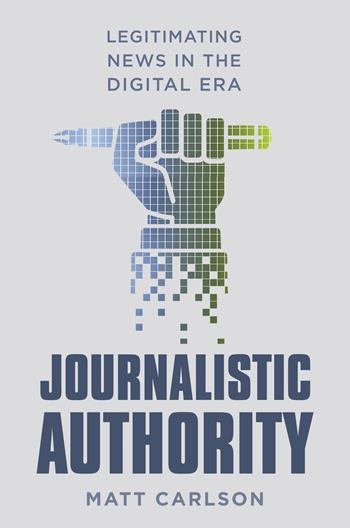 Legitimating News in the Digital Era

When we encounter a news story, why do we accept its version of events? Why do we even recognize it as news? A complicated set of cultural, structural, and technological relationships inform this interaction, and Journalistic Authority provides a relational theory for explaining how journalists attain authority. The book argues that authority is not a thing to be possessed or lost, but a relationship arising in the connections between those laying claim to being an authority and those who assent to it.

Matt Carlson examines the practices journalists use to legitimate their work: professional orientation, development of specific news forms, and the personal narratives they circulate to support a privileged social place. He then considers journalists' relationships with the audiences, sources, technologies, and critics that shape journalistic authority in the contemporary media environment. Carlson argues that journalistic authority is always the product of complex and variable relationships. Journalistic Authority weaves together journalists’ relationships with their audiences, sources, technologies, and critics to present a new model for understanding journalism while advocating for practices we need in an age of fake news and shifting norms.

The most comprehensive statement about journalistic authority I have ever read—bar none. Journalistic Authority fills a gaping hole in the scholarship and will be cited as an important and significant work in the field going forward. Sue Robinson, University of Wisconsin-Madison

Matt Carlson unpacks the historical, philosophical, and embodied linkages between professionalism and authority, and, in what amounts to a major contribution, assesses the present state of journalistic authority. Among the book’s many strengths is its very generous and catholic embrace of literatures from a broad swath of disciplines—sociology, political science, philosophy, history, and, of course, communication, journalism, and media studies. Linda Steiner, University of Maryland

An interesting and significant contribution to the field of journalism studies. Information, Communication & Society

There is a section in this book for just about every class in the journalism and communications curriculum . . . The book would allow for a deep dive into journalistic authority for upper level or graduate students, too. Journalism & Mass Communication Educator

[This book] is a useful text for scholars seeking to assign an overview to advanced undergraduates or graduate students, and it is a helpful summary for those seeking to develop their own research on particular manifestations or relationships of authority. International Journal of Communication

Matt Carlson is associate professor of communication at Saint Louis University. He is author of On the Condition of Anonymity: Unnamed Sources and the Battle for Journalism (2011) and coeditor of Boundaries of Journalism: Professionalism, Practices and Participation (2015) and Journalists, Sources, and Credibility: New Perspectives (2010).