Denunciations in the Spanish Inquisition, Romanov Russia, and Nazi Germany 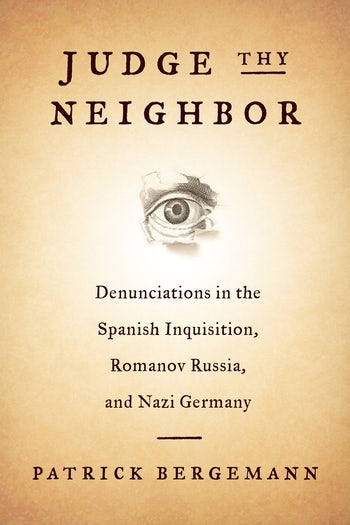 Denunciations in the Spanish Inquisition, Romanov Russia, and Nazi Germany

From the Spanish Inquisition to Nazi Germany to the United States today, ordinary people have often chosen to turn in their neighbors to the authorities. What motivates citizens to inform on the people next door? In Judge Thy Neighbor, Patrick Bergemann provides a theoretical framework for understanding the motives for denunciations in terms of institutional structures and incentives.

In case studies of societies in which denunciations were widespread, Bergemann merges historical and quantitative analysis to explore individual reasons for participation. He sheds light on Jewish converts’ shifting motives during the Spanish Inquisition; when and why seventeenth-century Romanov subjects fulfilled their obligation to report insults to the tsar’s honor; and the widespread petty and false complaints filed by German citizens under the Third Reich, as well as present-day plea bargains, whistleblowing, and crime reporting. Bergemann finds that when authorities use coercion or positive incentives to elicit information, individuals denounce out of self-preservation or to gain rewards. However, in the absence of these incentives, denunciations are often motivated by personal resentments and grudges. In both cases, denunciations facilitate social control not because of citizen loyalty or moral outrage but through the local interests of ordinary participants. Offering an empirically and theoretically rich account of the dynamics of denunciation as well as vivid descriptions of the denounced, Judge Thy Neighbor is a timely and compelling analysis of the reasons people turn in their acquaintances, with relevance beyond conventionally repressive regimes.

Social scientists neglect negative interpersonal ties. While lab experiments on the willing assumption of malevolent authority open a window on this topic, Bergemann is the first to examine betrayal and denunciation to the authorities in natural settings, and to theorize the common causes and patterns over the centuries. A fascinating opening into a dark side of human behavior. Mark Granovetter, Joan Butler Ford Professor, Stanford University

The nastiest feature of living in oppressive regimes is the pressure to denounce other people. But Bergemann shows some surprising patterns. Regimes can be inundated with unreliable information and petty grievances, and some incentives have more costs than others. This history is highly relevant in today’s era of whistleblowers, snitching, and online accusations. Randall Collins, author of Interaction Ritual Chains

Research on deviance typically focuses on those who violate prevailing norms. Bergemann turns the camera around: What if the real deviants are the accusers, not the accused? By applying alternative theoretical models to three historical cases, Bergemann identifies the viral strains in epidemics of denunciation, with stunning new insights. This exquisitely crafted study is a must-read not only for students of social control but for anyone who wonders if law enforcement should be crowdsourced. Michael Macy, Goldwin Smith Professor of Arts and Sciences, Cornell University

There have been case studies of the Inquisition and lots of work on the Gestapo, but the explanations in all of those are ad hoc and make no effort to generalize beyond their single cases. Judge Thy Neighbor offers a theory that I expect will both transform future work on these and other cases of denunciations and influence broader social-science analyses of group dynamics, social movements, and microsocial relations. Richard Lachmann, State University of New York at Albany

Patrick Bergemann is assistant professor of organizations and strategy at the University of Chicago Booth School of Business.