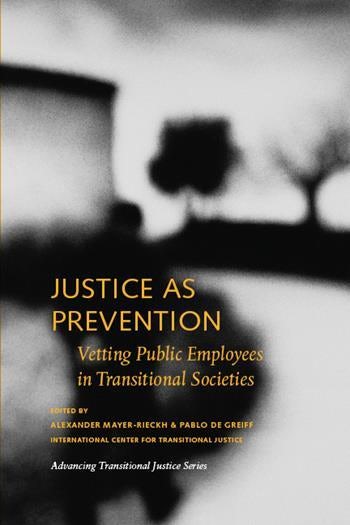 Countries emerging from armed conflict or authoritarian rule face difficult questions about what to do with public employees who perpetrated past human rights abuses and the institutional structures that allowed such abuses to happen. Justice as Prevention: Vetting Public Employees in Transitional Societies examines the transitional reform known as "vetting"—the process by which abusive or corrupt employees are excluded from public office. More than a means of punishing individuals, vetting represents an important transitional justice measure aimed at reforming institutions and preventing the recurrence of abuses. The book is the culmination of a multiyear project headed by the International Center for Transitional Justice that included human rights lawyers, experts on police and judicial reform, and scholars of transitional justice and reconciliation. It features case studies of Argentina, Bosnia and Herzegovina, the Czech Republic, El Salvador, the former German Democratic Republic, Greece, Hungary, Poland, and South Africa, as well as chapters on due process, information management, and intersections between other institutional reforms.

Alexander Mayer-Rieckh manages the Security System Reform Program at the International Center for Transitional Justice (ICTJ) and heads its office in Geneva. Formerly the chief of the Human Rights Office of the UN Mission in Bosnia and Herzegovina, Mayer-Rieckh has worked on behalf of the UN in Rwanda, Ethiopia, Eritrea, and Timor Leste and has published articles on post-conflict institutional reform and peacebuilding. Pablo de Greiff is director of research at the ICTJ. Formerly associate professor of philosophy at the State University of New York at Buffalo and Laurance S. Rockefeller Fellow at the Center for Human Values, Princeton University, de Greiff is the editor of seven books, most recently The Handbook of Reparations.