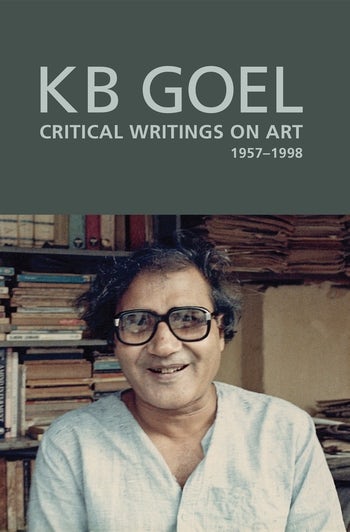 The mapping of the history and trajectory of Indian modern art is a project begun only in recent years and included in it is the recovery of lesser known names and moments from under the shadow of a few dominant ones. Within it, its conscience keeper—art criticism—has borne greater neglect and obscurity. One such voice, heard with considerable attention in its time, was that of the Delhi-based art critic K. B. Goel (1930–2018). Active from the late 1950s to the ’90s, his career broadly coincided with the modernist period. Active mainly as a reviewer, Goel also wrote lengthy reflective assessments, and his art writings stand out for an interpretative and often theory-based approach that is quite unique to Indian art criticism. Writing on some of the most definitive artists, movements, and styles of twentieth-century Indian art, he bears the distinction of successfully transitioning from his modernist training to theorize on the earliest postmodern developments in Indian art, such as installation art.

This annotated volume seeks to bring together Goel’s major writings, accompanied by a critical introduction that draws attention to his frameworks, concerns, and methodologies. It has a foreword by the eminent art critic Geeta Kapur.

Shruti Parthasarathy is an arts writer and editor with a special interest in Indian modern art.

Geeta Kapur is a noted art critic, art historian. and curator based in New Delhi.