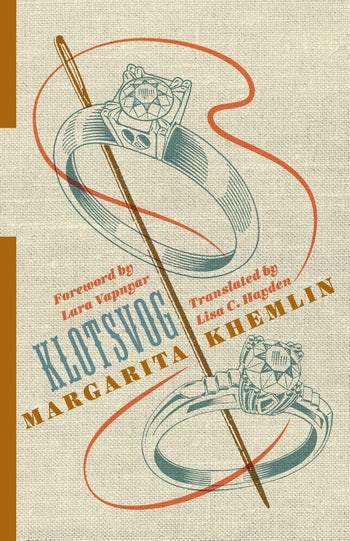 Klotsvog is a novel about being Jewish in the Soviet Union and the historical trauma of World War II—and it’s a novel about the petty dramas and demons of one strikingly vain woman. Maya Abramovna Klotsvog has had quite a life, and she wants you to know all about it. Selfish, garrulous, and thoroughly entertaining, she tells us where she came from, who she didn’t get along with, and what became of all her husbands and lovers.

In Klotsvog, Margarita Khemlin creates a first-person narrator who is both deeply self-absorbed and deeply compelling. From Maya’s perspective, Khemlin unfurls a retelling of the Soviet Jewish experience that integrates the historical and the personal into her protagonist’s vividly drawn inner and outer lives. Maya’s life story flows as a long monologue, told in unfussy language dense with Khemlin’s magnificently manipulated Soviet clichés and matter-of-fact descriptions of Soviet life. Born in a center of Jewish culture in Ukraine, she spent the war in evacuation in Kazakhstan. She has few friends but has had several husbands, and her relationships with her relatives are strained at best. The war looms over Klotsvog, and the trauma runs deep, as do the ambiguities and ambivalences of Jewish identity. Lisa Hayden’s masterful translation brings this gripping character study full of dark, sly humor and new perspectives on Jewish heritage and survival to an English-speaking audience.

Maya Abramovna Klotsvog is materialistic and manipulative. She’s a kind of Soviet Becky Sharp, in a 1950s version of Vanity Fair, trying to survive in a hostile world. . . . In giving voice to this complex, wounded character, Khemlin invites us to empathize even as we judge and to better understand our own common, terrified, irrational humanity. Phoebe Taplin, Los Angeles Review of Books

In many ways, Khemlin has written the picaresque novel for the Soviet Era. . . . Maya Klotsvog’s life recalls a Jew­ish adage men­tioned in the novel, ​'The house is burn­ing but the clock still keeps time.' We see a life that moves forward even while it smolders. Her survival is triumphant, as is this novel. Austin Sanchez-Moran, Jewish Book Council

Khemlin has created an unforgettable character and opened a window onto a world more people should know about. Marissa Moss, New York Journal of Books

Funny and enraging, moving and deeply felt. . . . A subtle, nuanced take on one apparently selfish woman and the difficult choices she makes. Kirkus Reviews

Klotsvog is a story of everyday darkness told by the ultimate unreliable narrator. Armed with endless justifications, Maya’s compelled by the power of what she sheds, whether it’s her Jewish heritage, her Ukrainian roots, her failed relationships, or her self-awareness. Yet part of what makes her confusing and compelling is the core of practical ambition, survivorship, and threat that lies beneath her vanity. As Maya vibrates on a frequency between ruthless self-determination and charming narcissism, Klotsvog infects its audience with a compulsion to determine which dominates. Foreword Reviews

This singular novel is simultaneously an intimate portrait of a woman who does not see the consequences of her actions and an exploration of the corrosive effects of anti-Semitism on individuals and society. Set after World War II, it feels eerily timely. A most necessary read. Aviya Kushner, author of The Grammar of God and language columnist at The Forward

Through the defensive, abject, yet utterly seductive voice of its untrustworthy narrator, Klotsvog entices us to enter the suspect schemes and shameless denials that characterize the dailiness of Soviet Jewish lives. As a novel, it is so utterly honest, it will make you cringe. Marianne Hirsch, author of The Generation of Postmemory: Writing and Visual Culture After the Holocaust

Like some of her predecessors—Jewish writers born in small Ukrainian towns—the talented Margarita Khemlin infused the lives of her characters with grand ambitions and luminous failures. A valuable and welcome addition to the growing body of Jewish-Russian literature in English translation. Maxim D. Shrayer, author of A Russian Immigrant and editor of Voices of Jewish-Russian Literature

Margarita Khemlin (1960–2015) was born in Chernigov, Ukraine, and lived in Moscow. Her works were shortlisted for the Russian Booker Prize and the Big Book Prize. Her books include The Investigator (2015).

Lisa C. Hayden has translated works from Russian including Eugene Vodolazkin’s The Aviator, Solovyov and Larionov, and Laurus. She blogs at Lizok’s Bookshelf, focusing on contemporary Russian fiction.

Lara Vapnyar is a novelist whose most recent book is Still Here.