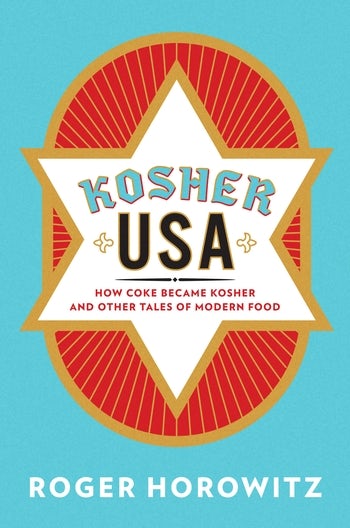 Kosher USA follows the fascinating journey of kosher food through the modern industrial food system. It recounts how iconic products such as Coca-Cola and Jell-O tried to become kosher; the contentious debates among rabbis over the incorporation of modern science into Jewish law; how Manischewitz wine became the first kosher product to win over non-Jewish consumers (principally African Americans); the techniques used by Orthodox rabbinical organizations to embed kosher requirements into food manufacturing; and the difficulties encountered by kosher meat and other kosher foods that fell outside the American culinary consensus.

Kosher USA is filled with big personalities, rare archival finds, and surprising influences: the Atlanta rabbi Tobias Geffen, who made Coke kosher; the lay chemist and kosher-certification pioneer Abraham Goldstein; the kosher-meat magnate Harry Kassel; and the animal-rights advocate Temple Grandin, a strong supporter of shechita, or Jewish slaughtering practice. By exploring the complex encounter between ancient religious principles and modern industrial methods, Kosher USA adds a significant chapter to the story of Judaism's interaction with non-Jewish cultures and the history of modern Jewish American life as well as American foodways.

Kosher USA is the single best book that I have ever read on the American kosher industry. It will entertain and educate both general readers and serious scholars. H-Judaic

This captivating book is recommended to all people who love to eat, learn, and enjoy a juicy corn beef sandwich followed by a tempting plate of chocolate Tofutti. Jewish Book Council

In a work that is equal parts history, memoir, and cultural analysis, Horowitz traces the dramatic rise of kosher food products, specifically how they made their way into American food culture and were later popularized in the mass market of consumer products. Library Journal (starred review)

You don't have to be Jewish to love Roger Horowitz's Kosher USA! It is three stories in one: a family narrative within a history of kosher within the industrialization of the American food system. Well researched, insightful, and delightful—even for goyim. Andrew Smith, editor in chief, Savoring Gotham: A Food Lover's Companion to New York City

Roger Horowitz's Kosher USA is a window into the world of the Jewish dietary laws and the conflict between being American and being kosher. The fascinating narrative tells the story of sturgeon, Coca Cola and Jello, as well as the intricate process of koshering meat in the modern world with the pivotal role of Temple Grandin and the large meat processors. An informative read for those who know and those who know nothing about kosher food's place in the American food system. Joan Nathan, author of Jewish Cooking in America

Kosher USA introduces us to a remarkable cast of characters: the rabbis, scientists, home cooks, food companies and activists who spent decades wrestling with the term "kosher" in a passionate effort to tame it. Based on a rich array of sources, written with warmth and insight, this is an exhilarating study of how an ancient religious scruple became a modern American empire. Laura Shapiro, author of Perfection Salad: Women and Cooking at the Turn of the Century

Set in the context of Jewish ascendancy into the middle class, Kosher U.S.A. traces the way in which changes in modes of production and the lure of consumption battered, challenged, and sustained an ancient Jewish practice. Horowitz tells a very readable story about the convergence of technology, science, religion, animal-rights activism, and ordinary Jewish consumers. There is no other book like it. Hasia Diner, director, Goldstein-Goren Center for American Jewish History, New York University

A thoughtful look at the convergence of faith, ethnicity, and the business of food. Kirkus Reviews

An informative and endlessly fascinating account of how Jewish law, modern food production, government regulation, business acumen, and religious politics have shaped the American kosher food industry. Roger Horowitz understands that arcane arguments over glycerin, rennet, and gelatin, and improbable tales concerning Coke, Kedem, Rubashkin, and Manischewitz form part of a larger and more important story. You don't have to be Jewish to appreciate his accomplishment! Jonathan D. Sarna, author of American Judaism: A History

The ever-changing and expanding kosher world makes this book quite timely and significant, as it traces the overlap interaction of religion and science. Roberta Scher, The Jewish Georgian

The history of the kosher food industry is thus quite skillfully told by Horowitz. American Jewish History

Written extremely well....this book is far more than tales; it is a chronicle of the changes of Jewish life in America in the last century. Religious Studies Review

Roger Horowitz is a food historian and director of the Center for the History of Business, Technology, and Society at the Hagley Museum and Library. He is the author of Negro and White, Unite and Fight: A Social History of Industrial Unionism in Meatpacking, 1930–1990 (1997) and Putting Meat on the American Table: Taste, Technology, Transformation (2005).