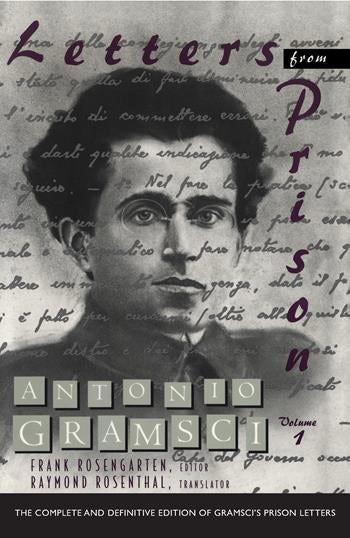 Antonio Gramsci (1891–1937) was one of the most original political thinkers in Western Marxism and an exceptional intellectual. Arrested and imprisoned by the Italian Fascist regime in 1926, Gramsci died before fully regaining his freedom, yet he wrote extensive letters while incarcerated, rich with insight into the physical and psychological tortures of prison. In meticulous detail, Gramsci records how political prisoners, himself included, contend with the fear of illness and death and the rules and regulations that threaten to efface their individuality. Forming an incomparable link between Gramsci's intellectual passion and his emotional vulnerability, Letters from Prison shows a man reconstructing his life while being separated from it, struggling to recapture the primary relationships that once defined his identity. Frank Rosengarten divides more than four hundred Gramsci letters into two companion volumes, complete with a chronology of the thinker's crucial life experiences, an introduction that sheds light on the main experiences and themes in the letters, biographical notes on his correspondents, and a bibliography of works cited in his letters.

The most complete and authoritative edition of Antonio Gramsci's prison letters available in any language. Raymond Rosenthal's translation... is reliable and gives a good sense of the colloquial style of the original. Frank Rosengarten's extensive notes, together with his introduction, represent a significant piece of Gramsci scholarship. Journal of the History of Philosophy

These volumes are laced with political insight. They are also shrewd, humorous, brave, and resourceful. Terry Eagleton, The Guardian

Painstakingly edited by Frank Rosengarten and movingly translated by Raymond Rosenthal... the letters are illuminated by critical commentary that highlights the contrast between the material conditions of Gramsci's confinement and the extraordinary spaciousness of his intellectual concerns. Socialism and Democracy

A credit to publisher, translator, and editor. Radical Philosophy

Invaluable.... The Letters serve to confirm Gramsci's remarkable intellectual stature.... Equally apparent is the depth of his commitment to his beliefs. The Journal of the Historical Association

One of the most poignant human stories of our century. Joseph A. Buttigieg, editor and translator of Gramsci's Prison Notebooks, Volumes 1, 2, and 3

Antonio Gramsci (1891-1937) was an Italian Marxist theorist, one-time leader of the Italian Communist Party, and founder of the official Party newspaper, l'Unita. Widely considered a leading exponent of post-Lenin neo-Marxism, he was imprisoned in 1926 by Mussolini's Fascist regime and remained incarcerated until shortly before his death. During this period he wrote more than 30 notebooks, which detailed his ideas about Italian history, critical theory, and Marxism. Among his key contributions to political theory is the notion of cultural hegemony, the means by which the ruling capitalist class maintains control of the state. In addition to the Prison Notebooks (Columbia, 1992-2007, three volumes), his Letters from Prison (Columbia, 1994, two volumes) and a collection of Pre-Prison Writings (Cambridge, 1994) have been published.