Lines of the Nation

Indian Railway Workers, Bureaucracy, and the Intimate Historical Self 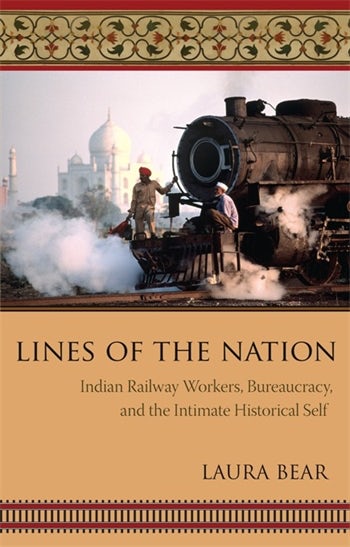 Lines of the Nation

Indian Railway Workers, Bureaucracy, and the Intimate Historical Self

Lines of the Nation radically recasts the history of the Indian railways, which have long been regarded as vectors of modernity and economic prosperity. From the design of carriages to the architecture of stations, employment hierarchies, and the construction of employee housing, Laura Bear explores the new public spaces and social relationships created by the railway bureaucracy. She then traces their influence on the formation of contemporary Indian nationalism, personal sentiments, and popular memory. Her probing study challenges entrenched beliefs concerning the institutions of modernity and capitalism by showing that these rework older idioms of social distinction and are legitimized by forms of intimate, affective politics.

Drawing on historical and ethnographic research in the company town at Kharagpur and at the Eastern Railway headquarters in Kolkata (Calcutta), Bear focuses on how political and domestic practices among workers became entangled with the moralities and archival technologies of the railway bureaucracy and illuminates the impact of this history today. The bureaucracy has played a pivotal role in the creation of idioms of family history, kinship, and ethics, and its special categorization of Anglo-Indian workers still resonates. Anglo-Indians were formed as a separate railway caste by Raj-era racial employment and housing policies, and other railway workers continue to see them as remnants of the colonial past and as a polluting influence.

The experiences of Anglo-Indians, who are at the core of the ethnography, reveal the consequences of attempts to make political communities legitimate in family lines and sentiments. Their situation also compels us to rethink the importance of documentary practices and nationalism to all family histories and senses of relatedness. This interdisciplinary anthropological history throws new light not only on the imperial and national past of South Asia but also on the moral life of present technologies and economic institutions.

This fine piece of scholarship deserves to be read by all those who wish to contribute to the field of historical anthropology. Manish K. Thakur, Journal of the Royal Anthropological Institute

Lines of the Nation is a substantial contribution to the study of the railway in South Asian history and society. H-Travel

Acknowledgments
Introduction
Part 1
1. The Indian Railways and the Management of the Material and Moral Progress of Nations, 1849–1860
2. An Indian Traveling Public, 1850–1900
3. Governing the Railway Family, 1860–1900
4. Industrial Unrest and the Cultivation of Railway Communities, 1897–1931
5. An Economy of Suffering: The Ethics of Popular Nationalism in Petitions from Railway Workers, 1930–1947
6. Public Genealogies: Anglo-Indian Family Histories and the Railway Archive, 1927–1950
Part 2
7. Uncertain Origins and the Strategies of Love: Portraits of Anglo-Indian Railway Families
8. Traces of the Archive: Documents, Bodies, and Nations in Anglo-Indian Family Histories
9. Railway Morality: Status and Authority in the Postcolonial Railway Bureaucracy
10. Ruins and Ghosts: The Uncanny and the Topography of the Colonial Past in the Railway Colony
Conclusion
Notes
Bibliography
Index

Laura Bear is lecturer in anthropology at the London School of Economics and Political Science. She is the author of the novel The Jadu House: Intimate Histories of Anglo-India.