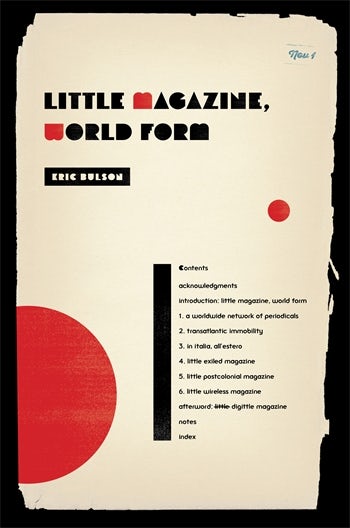 Little magazines made modernism. These unconventional, noncommercial publications may have brought writers such as James Joyce, T. S. Eliot, Ezra Pound, Marianne Moore, Mina Loy, and Wallace Stevens to the world but, as Eric Bulson shows in Little Magazine, World Form, their reach and importance extended far beyond Europe and the United States. By investigating the global and transnational itineraries of the little-magazine form, Bulson uncovers a worldwide network that influenced the development of literature and criticism in Africa, the West Indies, the Pacific Rim, and South America.

In addition to identifying how these circulations and exchanges worked, Bulson also addresses equally formative moments of disconnection and immobility. British and American writers who fled to Europe to escape Anglo-American provincialism, refugees from fascism, wandering surrealists, and displaced communists all contributed to the proliferation of print. Yet the little magazine was equally crucial to literary production and consumption in the postcolonial world, where it helped connect newly independent African nations. Bulson concludes with reflections on the digitization of these defunct little magazines and what it means for our ongoing desire to understand modernism's global dimensions in the past and its digital afterlife.

An amazing tour du monde. In 1965, Lionel Trilling wrote an African editor that no magazine "has ever taught me so much about matters I did not know about." This will still be the reaction of the contemporary reader, for whom a familiar literary-historical landscape is suddenly--and globally--lit up with an extraordinary multiplicity of new and henceforth inescapable landmarks. Bulson's remarkable book is an inescapable confrontation in any debates on modernism and world literature alike. Fredric Jameson, Duke University

This ground-breaking study is a much needed corrective to the Anglo-American focus of periodical studies. Traversing continents and disciplines, it provides a new critical approach to the history, medium, and politics of the little magazine, demonstrating its vital role in world literary culture. Expansive in scope yet grounded in vivid, nuanced case studies, this beautifully written book promises to transform our understanding of periodicals and of modernism itself. Gwen L. Allen, San Francisco State University

Bulson's book is a game changer. Conceptually and archivally rich, it moves us toward a global history of little magazines from 1900 into our digital age and expands modernism's spatial and temporal boundaries. The dialectic of big and little is on display throughout these pages as Bulson shows how the little magazine both as medium and material object became a world form as much in Africa, Asia and the Americas as in Europe. By emphasizing the material inhibitions of mobility and circulation, untranslatability, and cultural asymmetry, Bulson reveals how the little magazine as a world form challenges currently extant notions of world literature. Andreas Huyssen, Columbia University

Lucid, rigorous, and wide ranging, Eric Bulson's excellent study of the little magazine traces the form's flows and blockages, networks and disconnections. His book sheds valuable new light on the feisty magazines through which the world came to know writers such as Ezra Pound, James Joyce, T.S. Eliot, Marianne Moore, F.T. Marinetti, and Christopher Okigbo. Modernist and postcolonial literatures are shown to be powerfully interwoven in both their formal and material dimensions. Jahan Ramazani, University of Virginia

A solid contribution to scholarship on little magazines, Little Magazine, World Form revisits and delves into the international nature of this literary genre. C. B. Ewing, Cleveland Public Library, Choice

In this fascinating and paradigm-shifting book, Bulson considers the littleness of the modernist magazine on a global scale. Journal of European Periodical Studies

Little Magazine, World Form is unquestionably an important book for anyone interested in periodical studies and in larger debates about how magazines created—or failed to create—something called global modernism. Literature & History

Little Magazine, World Form is a major work of scholarship, sure to stand as a lasting contribution. Comparative Literature

Eric Bulson is professor of English at Claremont Graduate University. He is the author of Novels, Maps, Modernity: The Spatial Imagination, 1850-2000 (2007) and The Cambridge Introduction to James Joyce (2006).