Living with the Dragon

How the American Public Views the Rise of China 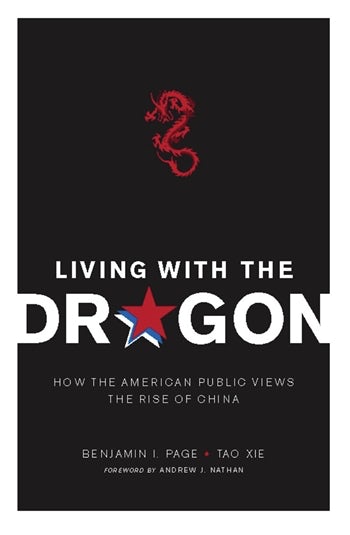 Living with the Dragon

How the American Public Views the Rise of China

It is widely believed that most Americans not only distrust but also despise China. Considering the country's violent political history, unprecedented economic rise, and growing military capabilities, China has become America's strongest market competitor and arguably the most challenging global threat to the United States.

Nevertheless, a full consideration of American opinion proves the opposite to be true. Carefully analyzing all available polls and surveys, Benjamin I. Page and Tao Xie find most Americans favor peaceful engagement with China. The public view has been surprisingly coherent and consistent, changing only in response to major events and new information.

While a majority of Americans are not happy that China's economy is projected to become as large as that of the United States, they are prepared to live with it. "Unfair" Chinese trade practices and their impact on American jobs and wages are a concern, along with the quality and safety of Chinese-made goods. However, Americans favor free trade with China, provided it is tempered with environmental and workplace protections. They also believe that the United States should "balance" Chinese power through alliances with neighboring countries, such as Japan. Yet they oppose military action to defend Taiwan. Page and Xie examine these opinions in relation to facts about China and in light of current U.S. debates on diplomacy and policy.

Benjamin I. Page is Gordon Scott Fulcher Professor of Decision Making at Northwestern University. His prizewinning books include The Foreign Policy Disconnect and The Rational Public. Page holds an AB degree in history and Ph.D. in political science from Stanford University and a JD degree in law from Harvard University, and he has studied economics at the Massachusetts Institute of Technology and Harvard University.

Tao Xie is associate professor and assistant dean at the School of English and International Studies, Beijing Foreign Studies University. He holds a Ph.D. in political science from Northwestern University and is the author of U.S.-China Relations: China Policy on Capitol Hill.