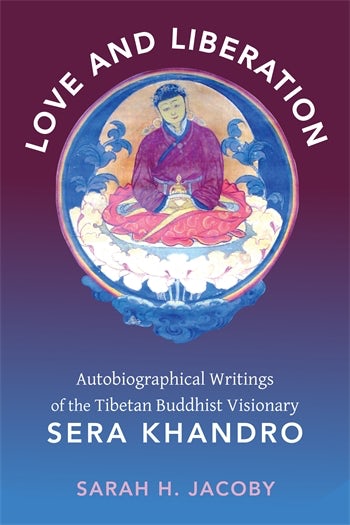 Love and Liberation reads the autobiographical and biographical writings of one of the few Tibetan Buddhist women to record the story of her life. Sera Khandro Künzang Dekyong Chönyi Wangmo (also called Dewé Dorjé, 1892–1940) was extraordinary not only for achieving religious mastery as a Tibetan Buddhist visionary and guru to many lamas, monastics, and laity in the Golok region of eastern Tibet, but also for her candor. This book listens to Sera Khandro's conversations with land deities, dakinis, bodhisattvas, lamas, and fellow religious community members whose voices interweave with her own to narrate what is a story of both love between Sera Khandro and her guru, Drimé Özer, and spiritual liberation.

Sarah H. Jacoby's analysis focuses on the status of the female body in Sera Khandro's texts, the virtue of celibacy versus the expediency of sexuality for religious purposes, and the difference between profane lust and sacred love between male and female tantric partners. Her findings add new dimensions to our understanding of Tibetan Buddhist consort practices, complicating standard scriptural presentations of male subject and female aide. Sera Khandro depicts herself and Drimé Özer as inseparable embodiments of insight and method that together form the Vajrayana Buddhist vision of complete buddhahood. By advancing this complementary sacred partnership, Sera Khandro carved a place for herself as a female virtuoso in the male-dominated sphere of early twentieth-century Tibetan religion.

Fascinating and compelling, this is a rare autobiography of a Tibetan female religious master. Jacoby combines pioneering research with high scholarly standards and delivers in a readable style a sensitive narrative rich in social, cultural, and psychological detail. Hildegard Diemberger, University of Cambridge

You will laugh, but more often you will cry when reading this first-ever study of a nonmonastic woman who wrote a Tibetan-language autobiography and a biography of a man. Sarah H. Jacoby's study of gender and sexuality is pathbreaking in the field of Tibetan studies. Because the main research materials were authored by a noncelibate woman, this book gives rich insight into one woman's conception of the complex social, political, and even medical aspects of tantric consort practices. Jacoby grounds Buddhist theory in the lived experience of an actual practitioner and illuminates this topic based on her fieldwork in Tibet. Her work reveals modern Tibetan history like never before—not by tracking political or institutional history, but through attention to the life of a runaway girl who transforms herself from lowly servant to famous teacher through her extraordinary vision of her life. Gray Tuttle, Columbia University

A detailed picture of the world of Tibetan Buddhism, particularly the tantric variety, in the early twentieth century. It explores questions long in the mind of students of Tibetan Buddhism about how the arcane practices of tantric Buddhism actually figure in the lives—and loves—of real historical people, particularly women. A great contribution worthy of close attention. Janet Gyatso, Harvard Divinity School

A complex work, rewarding in many ways this is a rare window into a world so different, and yet so historically recent Jacoby brings lots of food for thought and fresh new ways of seeing the familiar. Sumeru: Buddhist Books, Art, & News

Jacoby's book gives us a big infusion of data regarding what many of us have been wondering about with respect to sexuality and gender relations in Tibetan Buddhism, particularly in tantric communalities. Journal of the American Academy of Religion

[An] outstanding study of the extraordinary autobiography of Sera Khandro (1892–1940). Janet Gyatso, The Journal of Asian Studies

With this original study of one remarkable woman's life writing, Jacoby illuminates questions about renunciation, desire, and love in tantric Buddhist practice and opens the way for further study. Tulsa Studies in Women's Literature

Many aspects of this rich and fine book will be of interest to a wide range of scholars. It can be used for courses on Tibetan Buddhism trying to avoid a purely doctrinal approach, in gender studies courses that favor a balanced approach between various feminist theories, or in comparative literature courses. Journal of Religion

through the study of Sera Khandro’s writings, the author aims to expand the study of women’s autobiographies, trying to incorporate, aside of the spiritual dimension, their human communities and their spiritual environment. Religion and Gender

Jacoby’s is a work of impeccable scholarship that will be of interest not only to readers of Inner Asian Buddhism, but also of women’s studies and socialism and religion. Elizabeth D. Miller University of California, Riverside, Religious Studies Review

Sarah H. Jacoby is assistant professor in the Department of Religious Studies at Northwestern University. She is the coauthor of Buddhism: Introducing the Buddhist Experience and coeditor of Buddhism Beyond the Monastery: Tantric Practices and Their Performers in Tibet and the Himalayas.