How Militarism Shapes Sexuality and Romance 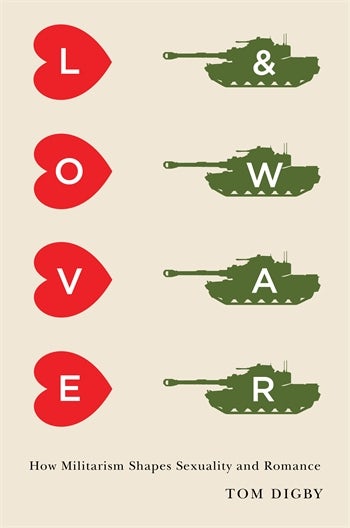 How Militarism Shapes Sexuality and Romance

Ideas of masculinity and femininity become sharply defined in war-reliant societies, resulting in a presumed enmity between men and women. This so-called "battle of the sexes" is intensified by the use of misogyny to encourage men and boys to conform to the demands of masculinity. These are among Tom Digby's fascinating insights shared in Love and War, which describes the making and manipulation of gender in militaristic societies and the sweeping consequences for men and women in their personal, romantic, sexual, and professional lives.

Drawing on cross-cultural comparisons and examples from popular media, including sports culture, the rise of "gonzo" and "bangbus" pornography, and "internet trolls," Digby describes how the hatred of women and the suppression of empathy are used to define masculinity, thereby undermining relations between women and men—sometimes even to the extent of violence. Employing diverse philosophical methodologies, he identifies the cultural elements that contribute to heterosexual antagonism, such as an enduring faith in male force to solve problems, the glorification of violent men who suppress caring emotions, the devaluation of men's physical and emotional lives, an imaginary gender binary, male privilege premised on the subordination of women, and the use of misogyny to encourage masculine behavior. Digby tracks the "collateral damage" of this disabling misogyny in the lives of both men and women, but ends on a hopeful note. He ultimately finds the link between war and gender to be dissolving in many societies: war is becoming slowly de-gendered, and gender is becoming slowly de-militarized.

Digby brings a fresh view to the term "battle of the sexes" by revealing the gendered politics and cultural programming that drive many of the irrationalities and antagonisms so familiar to heterosexual romantic relations. The argument is intellectually stimulating, politically important, and potentially quite relevant in personal ways for readers. Shira Tarrant, author of Men and Feminism and When Sex Became Gender

Love and War is a joy to read, indeed, a page turner. Tom Digby opens up a whole new way of understanding the problems intrinsic to heterosexual love, as well as the impact of misogyny in the everyday lives of men and women. His compelling descriptions of the interplay of gender and militarism will significantly alter the way we understand masculinity, sexuality, romantic love, misogyny, and even war itself. Of particular interest is Digby's use of what I call 'situated phenomenology' to shed important new light on the roots of misogyny; the social implications of this new understanding are quite sweeping. For specialists in gender studies like myself, Love and War will be recognized as a major and profoundly stimulating contribution to our field. The book will also appeal to a broad audience, thanks to Digby's highly engaging, conversational writing style. Sandra Bartky, author of Femininity and Domination

'Love is a battlefield,' sang the great philosopher Pat Benatar. But why? Why do the metaphors that describe love and romance refer to battles of the sexes, or interplanetary warfare between Martians and Venusians? In a book both judiciously wise and passionately angry, Tom Digby untangles the knots that bind love and war, set men and women in opposition, and create the enmity from which we have to recover if we are to build intimate and loving relationships. Michael Kimmel, author of Guyland: The Perilous World Where Boys Become Men and Angry White Men: American Masculinity at the End of an Era

Tom Digby's exciting new book argues that the glorification of militarism in contemporary Western culture generates hegemonic conceptions of masculinity and femininity that distort our relationships in all areas of life and produce deeply damaging consequences for everyone. The book is filled with fresh insights and telling cultural illustrations. It is a welcome—and very teachable—addition to the scholarly literature on gender and militarism, and should also prove fascinating to general readers. Alison M. Jaggar, author of Gender and Global Justice

Love: From romantic poetry to pop music to self-help manuals, we are told that it makes us whole and life worth living. Yet at the same time, love is described as a "battlefield" on which the "war between the sexes" is played out through power struggles, and mismatched expectations. Just metaphors? Tom Digby says "no"—emphatically—and the result is a probing yet engagingly reader-friendly look into how what he calls "war-reliant societies" foster notions about masculinity and femininity that are doomed to collision. Chock-full of examples from contemporary culture and blessedly free of jargon, Love and War is one of the freshest, smartest books I know to introduce students (and everyone else) to how ideas about gender impact both private life and public policy—and vice versa. Susan Bordo, author of Unbearable Weight, The Male Body and The Creation of Anne Boleyn: A New Look at England's Most Notorious Queen

The next time someone refers to a 'battle between the sexes' in the midst of a serious conversation about gender and power, ask them if they've read Love and War. Tom Digby's brilliant book infuses this tired phrase with new intellectual depth and political significance. And for those keeping score, Digby does take sides – with women and men, both of whom stand to gain by a breakdown and eventual transcendence of the gender straitjackets required to sustain militarism and other forms of organized violence. Jackson Katz, author of The Macho Paradox and Leading Men, and creator of the documentary film Tough Guise 2

In Love and War, author Tom Digby persuasively shows us that the gender divide we often call the "war between the sexes" is an unnecessary social construct that has tragic consequences for us all.

There is great value and hope to be found in Love and War. If we were able, as Professor Digby urges, to change the cultural programming of gender, we might finally free men from the stereotypes that continue to glorify antiquated codes of violence and the emotional paralysis of stoicism. And we might finally free women from having to live in perpetual fear of men. This is a book that should be widely read and deeply taken to heart. Kelly Moore, anti-rape activist, New York Times best-selling author, and co-author of the critically acclaimed Amber House Trilogy of young adult novels

Love & War is excellent at pulling apart masculinity and its implications for the lives of men and women within militaristic cultures. Bitch

Digby has produced an accessible, smart, persuasive work.... filled with keen insights, illuminating connections, and heartbreaking examples. Anyone interested in gender, the military, or love should read this book–which is to say that almost everyone should read this book. Andrew Huebner, H-War

Love and War is a treasure trove of insights into gender and the, often tragic, experiences of men and women. There are many aspects of the book that are remarkable but the vivid, and moving, portrait Digby paints of how men suffer under the gender binary is especially valuable. The "warrior masculinity" that he describes is going to influence my teaching and thinking for some time. I will surely be incorporating the book into my class on feminist philosophy. I think it has a better than average chance of getting young people at West Point and elsewhere to think deeply about themselves and their culture. Graham Parsons, United States Military Academy, West Point, NY

Short, fun read.... filled with insights and observations that invest the reader emotionally and provoke personal reflection. It is a fine piece of public philosophy that should be of interest far beyond academia. Feminism and Philosphy

Read the third chapter, "How to Make a Warrior":

Tom Digby is professor of philosophy at Springfield College in Massachusetts. He has written, lectured, and taught about gender for more than twenty-five years. His multimedia talks about the intersections of love, masculinity, and war have been given at numerous colleges and universities. His previous book is Men Doing Feminism.