A Tantric Couple in Modern Tibet 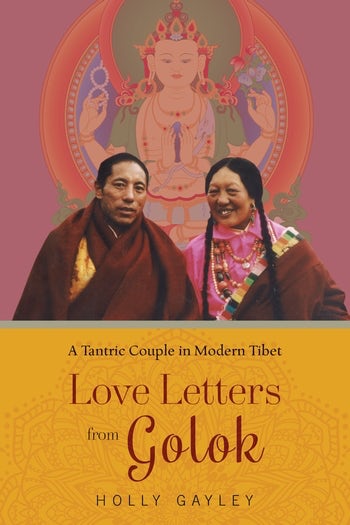 A Tantric Couple in Modern Tibet

Love Letters from Golok chronicles the courtship between two Buddhist tantric masters, Tāre Lhamo (1938–2002) and Namtrul Rinpoche (1944–2011), and their passion for reinvigorating Buddhism in eastern Tibet during the post-Mao era. In fifty-six letters exchanged from 1978 to 1980, Tāre Lhamo and Namtrul Rinpoche envisioned a shared destiny to "heal the damage" done to Buddhism during the years leading up to and including the Cultural Revolution. Holly Gayley retrieves the personal and prophetic dimensions of their courtship and its consummation in a twenty-year religious career that informs issues of gender and agency in Buddhism, cultural preservation among Tibetan communities, and alternative histories for minorities in China.

The correspondence between Tare Lhamo and Namtrul Rinpoche is the first collection of "love letters" to come to light in Tibetan literature. Blending tantric imagery with poetic and folk song styles, their letters have a fresh vernacular tone comparable to the love songs of the Sixth Dalai Lama, but with an eastern Tibetan flavor. Gayley reads these letters against hagiographic writings about the couple, supplemented by field research, to illuminate representational strategies that serve to narrate cultural trauma in a redemptive key, quite unlike Chinese scar literature or the testimonials of exile Tibetans. With special attention to Tare Lhamo's role as a tantric heroine and her hagiographic fusion with Namtrul Rinpoche, Gayley vividly shows how Buddhist masters have adapted Tibetan literary genres to share private intimacies and address contemporary social concerns.

An extraordinary set of letters between a man and woman lie at the heart of this study of love, religious transcendence, and cultural trauma in post-Cultural Revolution Tibet. I know of no body of material that gives a more intricate picture of how Tibetan Tantric Buddhism could penetrate and transform worldly troubles and politics into the sublime aspirations of tantric vision. Gayley offers us an unparalleled view of twentieth-century Tibetan religion as it touched every aspect of human life. Plus an astonishing account of a female master whose romance with another master elevated them both into heroes for Eastern Tibet during most challenging times. Janet Gyatso, Hershey Professor of Buddhist Studies, Harvard University

Holly Gayley has that rarest of gifts, a scholar's eye and a story-teller's ear. Her book is filled with nuance and insight about the power of Tibetan cultural narratives of gendered spiritual prowess and the navigation of coded relationships. Never merely theoretical, Gayley grounds every observation in dynamic detail and a story-line compelling as any novel. Anne C. Klein, Rice University, cofounder of Dawn Mountain, author of Meeting the Great Bliss Queen, translator of Khetsun Sangpo's Strand of Jewels

Gayley weaves together life writing, ethnography, and letters in an unprecedented fashion, and it pays off: her treatment of difficult primary sources — translated here for the first time — is inviting and engaging. Love Letters from Golok addresses issues of real and abiding concern in contemporary China. Kurtis R. Schaeffer, University of Virginia

This tale of love and healing should be read by anyone in the fields of Tibetan Studies, gender studies, and religious studies, and is accessible to undergraduates as well as scholars of religion. Reading Religion

List of Illustrations
Acknowledgments
Note on Transliteration and Translation
Introduction: Journey to Golok
1. Daughter of Golok: Tare Lhamo's Life and Context
2. Local Heroine: The Hagiography of Cultural Trauma
3. Inseparable Companions: A Buddhist Courtship and Correspondence
4. Emissaries of Padmasambhava: Tibetan Treasures and Healing Trauma
5. A Tantric Couple: The Hagiography of Cultural Revitalization
Epilogue: The Legacy of a Tantric Couple
Appendix A: Catalogue of the Letters of Namtrul Rinpoche
Appendix B: Catalogue of the Letters of Tare Lhamo
Abbreviations
Notes
Glossary of Tibetan Names
Bibliography
Index

Holly Gayley is assistant professor of Buddhist studies at the University of Colorado, Boulder. She is coeditor of A Gathering of Brilliant Moons: Practice Advice from the Great Rimé Masters of Tibet (2017) and author of articles published in History of Religions, Journal of Buddhist Ethics, Contemporary Buddhism, and Himalaya.