Making Sense of the Alt-Right 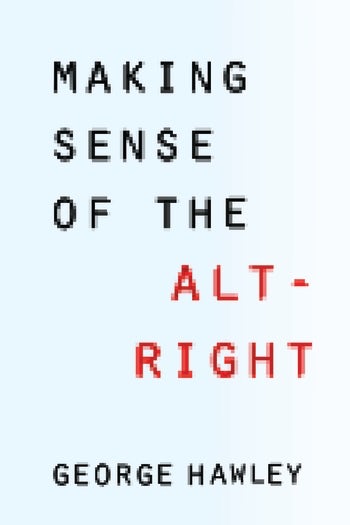 Making Sense of the Alt-Right

During the 2016 election, a new term entered the mainstream American political lexicon: “alt-right,” short for “alternative right.” Despite the innocuous name, the alt-right is a white-nationalist movement. Yet it differs from earlier racist groups: it is youthful and tech savvy, obsessed with provocation and trolling, amorphous, predominantly online, and mostly anonymous. And it was energized by Donald Trump’s presidential campaign. In Making Sense of the Alt-Right, George Hawley provides an accessible introduction and gives vital perspective on the emergence of a group whose overt racism has confounded expectations for a more tolerant America.

Hawley explains the movement’s origins, evolution, methods, and core belief in white-identity politics. The book explores how the alt-right differs from traditional white nationalism, libertarianism, and other online illiberal ideologies such as neoreaction, as well as from mainstream Republicans and even Donald Trump and Steve Bannon. The alt-right’s use of offensive humor and its trolling-driven approach, based in animosity to so-called political correctness, can make it difficult to determine true motivations. Yet through exclusive interviews and a careful study of the alt-right’s influential texts, Hawley is able to paint a full picture of a movement that not only disagrees with liberalism but also fundamentally rejects most of the tenets of American conservatism. Hawley points to the alt-right’s growing influence and makes a case for coming to a precise understanding of its beliefs without sensationalism or downplaying the movement’s radicalism.

Making Sense of the Alt-Right understands alt-right thinking from the inside. George Hawley's erudition on the subject is evident. The work is supple in tracing out the lineage and development of the movement against the conservative establishment and in explaining its present incarnation in the form of the alt-right. Lawrence Rosenthal, University of California, Berkeley

Making Sense of the Alt-Right is clearly written, insightful, and impressively documented, getting the reader genuinely close to the essence of this amorphous movement. I know of no other work that does nearly as good a job of dealing with the alt-right, and I suspect that this will become the "go-to" work on the movement for students, politicians, and serious readers alike. Michael Barkun, Syracuse University

I am no fan of the term “alt-right,” but an academic study of this much-hyped movement was well overdue, and George Hawley was the only one who could make at least some sense of them. Recommended reading! Cas Mudde, University of Georgia

George Hawley’s fine new book is one of the first accounts of the rise of a new radical political ideology. It’s an important contribution to scholarship about extremism, digital communication, and contemporary American political culture. It’s also a good read, packed with interesting anecdotes about right-wing intellectual infighting and the online community of the alt-right. All serious followers of American politics today will want to read it. Thomas J. Main, Marxe School of Public and International Affairs, Baruch College, CUNY

Suddenly, everyone claims to be an expert on the white-nationalist reboot, but Hawley actually is. His deep knowledge makes this the most thorough guide to the movement yet. New York Magazine

WHY READ IT? A good, short (222 pages) primer to help understand the political forces responsible for Charlottesville (and the election of Donald Trump as president). Hollywood Reporter

An important contribution to contemporary political discourse that sheds light on a disturbingly influential group in American politics. Library Journal

For anyone trying to figure out how to appeal to the exasperated while maintaining hard boundaries against white supremacists, an important book... Joan C. Williams, Times Literary Supplement

Valuable accounts of a movement that [the author] has studied in depth. Inside Higher Ed

In Making Sense of the Alt-Right, Hawley does what he set out to do: exploring deep into the heart of the alt-right and its origins, ideology, and political influence. Political Science Quarterly

George Hawley is an assistant professor of political science at the University of Alabama. He is the author of Voting and Migration Patterns in the U.S. (2013), White Voters in Twenty-First Century America (2014), and Right-Wing Critics of American Conservatism (2016).