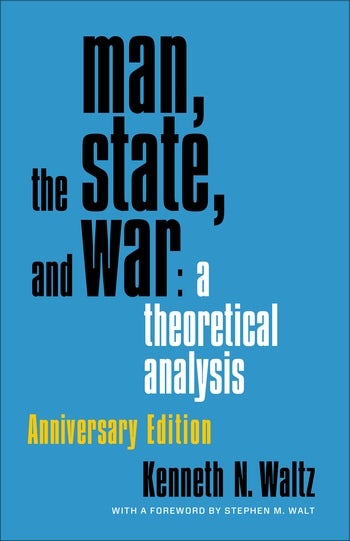 What are the causes of war? How might the world be made more peaceful? In this landmark work of international relations theory, first published in 1959, the eminent realist scholar Kenneth N. Waltz offers a foundational analysis of the nature of conflict between states. He explores works by both classic political philosophers, such as St. Augustine, Hobbes, Kant, and Rousseau, and modern psychologists and anthropologists to discover ideas intended to explain war among states and related prescriptions for peace. Waltz influentially distinguishes among three “images” of the origins of war: those that blame individual leaders or human nature, those rooted in states’ internal composition, and those concerning the structure of the international system. With a foreword by Stephen M. Walt on the legacy and continued relevance of Waltz’s work, this anniversary edition brings new life to a perennial international relations classic.
Foreword to the 2018 Anniversary Edition, by Stephen M. Walt
Preface to the 2001 Edition
Preface to the 1959 Edition
1. Introduction
2. The First Image: International Conflict and Human Behavior
3. Some Implications of the First Image: The Behavioral Sciences and the Reduction of Interstate Violence
4. The Second Image: International Conflict and the Internal Structure of States
5. Some Implications of the Second Image: International Socialism and the Coming of the First World War
6. The Third Image: International Conflict and International Anarchy
7. Some Implications of the Third Image: Examples from Economics, Politics, and History
8. Conclusion
Bibliography
Index

Kenneth N. Waltz (1924–2013) was a preeminent scholar of international relations. He was Ford Professor Emeritus at the University of California, Berkeley, and was senior research scholar at the Institute of War and Peace Studies at Columbia University, where he began his academic career. His books include Theory of International Politics (1979).