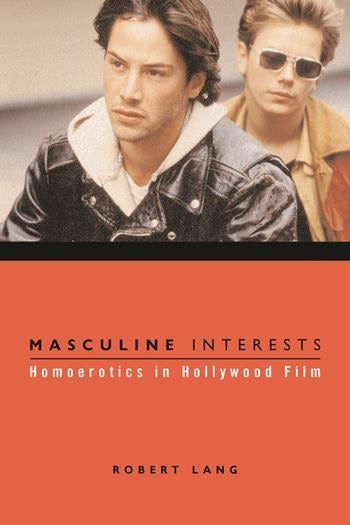 Until Masculine Interests not much had been written about men "as men" in the cinema. Now Robert Lang considers how Hollywood articulates the eroticism that is intrinsic to identification between men. He considers masculinity in social and psychoanalytic terms, maintaining that a major function of the movies is to define different types of masculinity, and to either valorize or criticize these forms. Focusing on several films—primarily The Lion King, The Most Dangerous Game, The Outlaw, Kiss Me Deadly, Midnight Cowboy, Innerspace, My Own Private Idaho, the Batman series, and Jerry Maguire—Lang questions the way in which American culture distinguishes between homosexual and nonhomosexual forms of male bonding. In arguing for a much more complex recognition of the homosocial continuum, he contends that queer sexuality is far more present in American cinema than is usually acknowledged.

Articulates the big screen's dedication to eroticism between men, especially in movies that now belong to the film canon. Gay & Lesbian Review

Preface
1. Masculine Interests
2. Oedipus in Africa: The Lion King
3. To "Have Known Ecstasy": Hunting Men in The Most Dangerous Game
4, Friendship and Its Discontents: The Outlaw
5. Looking for the "Great Whatsit": Kiss Me Deadly and Film Noir
6. Midnight Cowboy's Backstory
7. Innerspace: A Spectacular Voyage to the Heart of Identity
8. Batman and Robin: A Family Romance
9. My Own Private Idaho and the New Queer Road Movies
10. "The Things We Think and Do Not Say": Jerry Maguire and the Business of Personal Relationships
Concerning Happiness: An Afterword
Notes
Bibliography
Index