How the Need to Win Audiences Has Shaped Higher Education 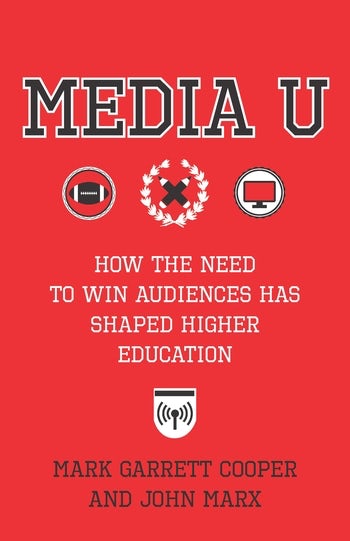 How the Need to Win Audiences Has Shaped Higher Education

Are homecoming games and freshman composition, Twitter feeds and scholarly monographs really mortal enemies? Media U presents a provocative rethinking of the development of American higher education centered on the insight that universities are media institutions. Tracing over a century of media history and the academy, Mark Garrett Cooper and John Marx argue that the fundamental goal of the American research university has been to cultivate audiences and convince them of its value.

Media U shows how universities have appropriated new media technologies to convey their message about higher education, the aims of research, and campus life. The need to create an audience stamps each of the university’s steadily proliferating disciplines, shapes its structure, and determines its division of labor. Cooper and Marx examine how the research university has sought to inform publics and convince them of its value to American society, from the rise of football and Great Books programs in the early twentieth century through a midcentury communications complex linking big science, New Criticism, and design, from the co-option of 1960s student activist media through the early-twenty-first-century reception of MOOCs and the latest promises of technological disruption. The book considers the ways in which universities have used media platforms to reconcile national commitments to equal opportunity with corporate capitalism as well as the vexed relationship of democracy and hierarchy. By exploring how media engagement brought the American university into being and continues to shape academic labor, Media U presents essential questions and resources for reimagining the university and confronting its future.

Tackling everything from football to general education to the credit hour, Media U helps us understand our turbulent university landscape. With a deep sense of history and careful marshaling of data, Cooper and Marx show us that higher ed is not just a maker of knowledge but also a platform for information—a medium itself. Paula M. Krebs, Executive Director, Modern Language Association

This book shows that many of the strangest yet most important features of universities come from their status as media operations that try endlessly to increase and manage their audiences. By putting the pieces of our Humpty-Dumpty campuses back together again, the authors offer original insights and even reasons to hope for new directions in higher ed. Christopher Newfield, University of California, Santa Barbara

This book powerfully demonstrates that universities have been media institutions all along, well before the mobile phone and the MOOC. Cooper and Marx challenge us to consider what is at stake when universities approach the educated class as an “audience” and what mindsets and strategies they deploy in the process. Provocative and timely, Media U is bound to stir up discussion and debate. Lisa Parks, Massachusetts Institute of Technology

This is a key and compelling study that, more than just in media studies, intervenes in insightful ways in debates about the very nature, purpose, mission, and reach—both real and possible—of the American university. Dana Polan, New York University

It is an imaginative work that will give fellow scholars and motivated laypeople plenty to think about. It deserves a big audience. I hope it gets one. Christopher P. Loss, Academe

Mark Garrett Cooper is professor of film and media studies at the University of South Carolina. He is the author of Love Rules: Silent Hollywood and the Rise of the Managerial Class (2003) and Universal Women: Filmmaking and Institutional Change in Early Hollywood (2011) and the coeditor of Rediscovering US Newsfilm: Cinema, Television, and the Archive (2018).

John Marx is professor of English at the University of California, Davis. He is the author of The Modernist Novel and the Decline of Empire (2005) and Geopolitics and the Anglophone Novel, 1890–2011 (2012).