Across History, Media, and National Cultures 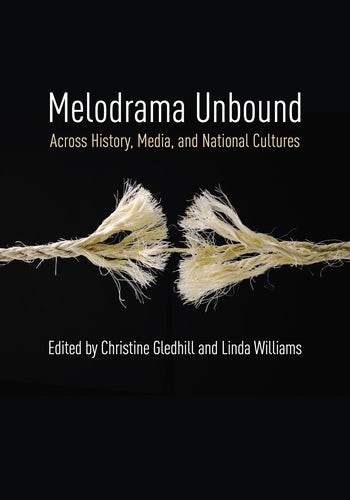 Across History, Media, and National Cultures

For too long melodrama has been associated with outdated and morally simplistic stereotypes of the Victorian stage; for too long film studies has construed it as a singular domestic genre of familial and emotional crises, either subversively excessive or narrowly focused on the dilemmas of women. Drawing on new scholarship in transnational theatrical, film, and cultural histories, this collection demonstrates that melodrama is a transgeneric mode that has long spoken to fundamental aspects of modern life and feeling.

Pointing to melodrama’s roots in the ancient Greek combination of melos and drama, and to medieval Christian iconography focused on the pathos of Christ as suffering human body, the volume highlights the importance to modernity of melodrama as a mode of emotional dramaturgy, the social and aesthetic conditions for which emerged long before the French Revolution. Contributors articulate new ways of thinking about melodrama that underscore its pervasiveness across national cultures and in a variety of genres. They examine how melodrama has traveled to and been transformed in India, China, Japan, and South America, whether through colonial circuits or later, globalization; how melodrama mixes with other modes such as romance, comedy, and realism; and finally how melodrama has modernized the dramatic functions of gender, class, and race by orchestrating vital aesthetic and emotional experiences for diverse audiences.

Two of the most brilliant and lucid writers on film melodrama have put together this wonderful anthology that both consolidates and clarifies thinking about the topic and opens out the field, placing film melodrama more precisely and securely in relation to its theatrical and literary antecedents and extending consideration from well beyond the confines of Europe and North America. A hand-picked roster of contributors confirm the unbounded scope of the collection and demonstrate the importance and range of melodrama and above all the complexity, ideological urgency, and intoxicating pleasures of its emotions. Richard Dyer, King’s College London and St. Andrews University

Melodrama Unbound extends the already robust feminist analysis of melodramatic modes into transmedial, transnational, and philosophical scenes. It addresses from diverse viewpoints how the emotional encounter with the artwork becomes generally held. The writing is diverse, vivid, and conceptually challenging in all the best senses. Lauren Berlant, University of Chicago

What riches the reader will find in this volume! Its vision is rigorously transmedial and transnational. Within this expansive framework, a wide variety of essays “unbind” melodrama from critical misconceptions that have hindered our understanding of its importance, its pervasiveness, and its power as a mode that continues to flourish in a magnificent proliferation of genres, media, art forms, and forms of social expression. Carolyn Williams, Rutgers University

This book brings melodrama studies up to date with strongly argued, exciting, original work. It has been many years since melodrama has received such varied and sustained attention in a single volume as we find in Melodrama Unbound, which changes once again how we understand this protean form. Robert Lang, author of American Film Melodrama: Griffith, Vidor, Minnelli

Prologue: The Reach of Melodrama, by Christine Gledhill
Acknowledgments
Introduction, by Christine Gledhill and Linda Williams
Part I: Melodrama’s Crossmedia, Transnational Histories
1. Unbinding Melodrama, by Matthew Buckley
2. The Passion of Christ and the Melodramatic Imagination, by Richard Allen
3. Boucicault in Bombay: Global Theater Circuits and Domestic Melodrama in the Parsi Theater, by Kathryn Hansen
4. Global Melodrama and Transmediality in Turn-of-the-Century Japan, by Hannah Airriess
5. Transnational Melodrama, Wenyi, and the Orphan Imagination, by Zhen Zhang
6. Performing/Acting Melodrama, by Helen Day-Mayer and David Mayer
7. Melodrama and the Making of Hollywood, by Hilary A. Hallett
8. Modernizing Melodrama: The Petrified Forest on American Stage and Screen (1935–1936), by Martin Shingler
9. One Suffers but One Learns: Melodrama and the Rules of Lack of Limits, by Carlos Monsiváis (trans. Kathleen M. Vernon)
10. World and Time: Serial Television Melodrama in America, by Linda Williams
11. Melodrama’s “Authenticity” in Carl Th. Dreyer’s La Passion de Jeanne d’Arc, by Amanda Doxtater
Part II: Cultural and Aesthetic Debates
12. “Tales of Sound and Fury . . .” or, The Elephant of Melodrama, by Linda Williams
13. Repositioning Excess: Romantic Melodrama’s Journey from Hollywood to China, by Panpan Yang
14. Melodrama and the Aesthetics of Emotion, by E. Deidre Pribram
15. Expressionist Aurality: The Stylized Aesthetic of Bhava in Indian Melodrama, by Ira Bhaskar
16. The Sorrow and the Piety: Melodrama Rethought in Postwar Italian Cinema, by Louis Bayman
17. Costumes as Melodrama: Super Fly, Male Costume, and the Larger-Than-Life, by Drake Stutesman
18. Melodrama and Apocalypse: Politics and the Melodramatic Mode in Contagion, by Despina Kakoudaki
19. Even More Tears: The Historical Time Theory of Melodrama, by Jane M. Gaines
Bibliography
Contributor Biographies
Index

Christine Gledhill is a visiting professor in cinema studies at the University of Sunderland. She is the author of Reframing British Cinema, 1918–1928: Between Restraint and Passion (2003); editor of Home Is Where the Heart Is (1987); and coeditor of Doing Women’s Film History: Reframing Cinemas Past and Future (2015).

Linda Williams is professor emerita in film & media and rhetoric at the University of California, Berkeley. Her books include Hard Core: Power, Pleasure and the “Frenzy of the Visible” (1989/1999); Playing the Race Card: Melodramas of Black and White from Uncle Tom to O.J. Simpson (2001); and On The Wire (2014).