Mental Health in the War on Terror 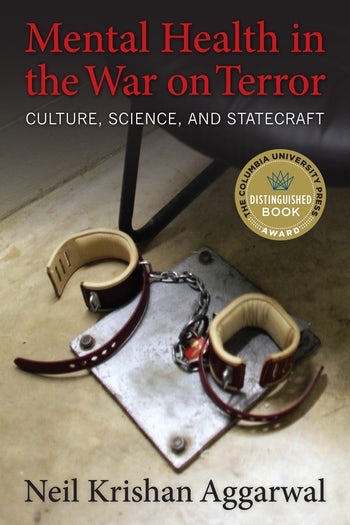 Mental Health in the War on Terror

Professional interpretation, like all interpretations, is subject to cultural forces. Drawing on cultural psychiatry and medical anthropology, Aggarwal analyzes the transformation of definitions for normal and abnormal behavior in a vast array of sources: government documents, professional bioethical debates, legal motions and opinions, psychiatric and psychological scholarship, media publications, and policy briefs. Critical themes emerge on the use of mental health in awarding or denying disability to returning veterans, characterizing the confinement of Guantánamo detainees, contextualizing the actions of suicide bombers, portraying Muslim and Arab populations in psychiatric and psychological scholarship, illustrating bioethical issues in the treatment of detainees, and supplying the knowledge and practice to deradicalize terrorists. Throughout, Aggarwal explores this fascinating, troublesome transformation of mental-health science into a potential instrument of counterterrorism.

Very few people are able to synthesize the disciplines of anthropology, mental health, cultural studies, political theory, religious studies, bioethics, and forensics in the way Neil Krishan Aggarwal does in this book. He offers a balanced and insightful account of the challenges of forensic psychiatry in assessing and managing terrorism suspects. Hamada Hamid, Yale University

Using concrete clinical cases to anchor sophisticated and thought-provoking analysis, Aggarwal demonstrates that not only ethics but also the very nature of clinical knowledge and practice are at issue in the use, and especially misuse, of mental-health categories in the War on Terror. His book brings a new level of critical self-reflection to the psychology of terrorism. James W. Jones, author of Blood That Cries Out from the Earth: The Psychology of Religious Terrorism

An indispensable and astute account of the insidious cultural manifestations emerging from the justifying framework that is the War on Terror. In light of the increasingly intolerable actions permissible through deference to notions of national security, Aggarwal's review of bioethics is crucial to understanding the evolution, through politicization, of approaches to mental health. Aggarwal's review of orientalist positions within psychotherapy literature, which underpin this creeping securitization of mental health, reinforces the impact of culturally laden views on Islam and Muslims. An essential read. Orla Lynch, Centre for the Study of Terrorism and Political Violence, University of St Andrews

Aggarwal has written a theoretically sophisticated, multisided exploration of how the War on Terror and mental health are powerfully connected through the 'culture' of psychiatry, psychoanalysis, hospitals, courts, the military, and Islam. His argument is that science, religion, and moral experience are not just infiltrated with cultural meanings but come to create new cultural forms such as 'trauma,' forensic processes, and 'terrorism,' which in turn remake the world. An important achievement. Arthur Kleinman, Harvard University

A clear and impassioned discussion of the presence of psychiatrists and mental-health knowledge practices in the micro-functioning of the War on Terror and the impact of each on the other. The book is a compelling portrayal of the way that medicine and its scientific languages and knowledge structures are able to move through and across political domains, being put to use to challenge and undo the very power structures they are meant to serve. Engaging, rigorous, and beautifully written. Sarah Pinto, Tufts University

In this impressive and provocative volume, Aggarwal reveals many hidden failings of dominant social and political thought on radicalization and terrorism. Bioethics, arabic science, and symptoms in Guantanamo detainees are all debated to present an alternative, rounded, and compelling approach that includes medicine and cultural psychiatry as essential actors. Kamaldeep Bhui, Queen Mary University of London

The questions it poses are valuable, difficult, and without easy answers – for clinicians, military leaders, or even civilians, all of whom must live with a medical culture deeply marked by the war on terror. Publishers Weekly

Should be required reading for psychiatrists and mental health professionals interested in the psychology of Islamist terrorism... It is an exemplar of the manner in which the lens of transcultural psychiatry can clarify our perspective... Psychiatric Services

Can be recommended as an introduction to the topic and the multifaceted questions and problems it entails. History of Psychiatry

Neil Krishan Aggarwal is an assistant professor of clinical psychiatry at Columbia University and a research psychiatrist at the New York State Psychiatric Institute. His areas of research interest are cultural psychiatry, cultural-competence training, and psychiatric anthropology. He is especially interested in conceptions of mental health and illness among South Asian and Middle Eastern populations.