Migration as a (Geo-)Political Challenge in the Post-Soviet Space 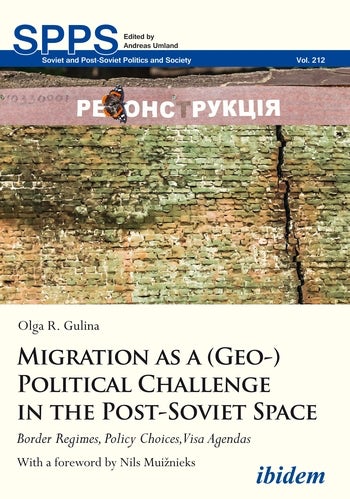 Migration as a (Geo-)Political Challenge in the Post-Soviet Space

Over the last three decades, migration management in the newly independent states which emerged from the ruins of the USSR in 1991 has become a tool for staking out zones of influence, a winning slogan for election campaigns, and a handle on the domestic population. Such an instrumentalization of migration is widespread in all post-Soviet republics. (Geo-)political games around migration issues are also a mechanism of foreign influence and a method of destabilization across the former USSR as well as an apology for slowing down reforms and even for transforming their character or vector.

The ruling elites of the newly independent states exploit, with different degrees of intensity and success, institutions and rules of migration laws, including the granting of citizenship, asylum, temporary and permanent residence authorization, etc., in order to advance certain foreign and domestic policies. The directions of various post-Soviet nations’ migration policies—be they pro-European, pro-Asian, or pro-Russian—are informed less by a pursuit of cultural, historical, or economic advantages for the respective countries and their populations than by the dynamics of geopolitical rivalry and often by the principle “either an ally or a rival; there is no middle ground.”

This fascinating volume explains why shifts in migration management in the post-Soviet countries are both causes for and consequences of political changes that influence foreign and domestic policy making.

Well-written and well-structured publication on the highly topical issue of migration in the post-Soviet area. Easy to read and extremely useful for multidisciplinary research. Roman Petrov, National University of Kyiv-Mohyla Academy

An excellent presentation of all relevant aspects of migration from and within Eastern Europe since the 1990s, providing a fresh perspective that is usually missing in the EU's current debate on this topical issue. Gulina reminds us of how much national identity and regional political interest determine migration-related legislation on the European continent and how this also connects with political conflicts in the post-Soviet space. Mirko Kruppa, head of politics of the European Union Delegation in Russia

Gulina offers a fresh and truly complete consideration of migration in the post-Soviet space, not only as a key factor in consolidating the ethnic and national identities of the region’s newly independent states but also as an extension of foreign policy and geopolitics as a tool in the hands of governments. Her treatment of the interplay of territorial conflicts in Central Asia, the Caucasus, and Eastern Europe with population movements within and out of the post-Soviet region is an especially timely and important contribution. This work draws on a vast trove of primary source material and sets a high bar for objectivity and methodological rigor. Matthew Rojansky, director of the Wilson Center’s Kennan Institute

This book features remarkable research and an outstanding review of developments in the area of migration between former states of the USSR and the regional successor entities and groupings such as NIS, CIS, EAEU, and GUAM. It touches upon migration as a tool for pursuing internal and external political ambitions, sometimes reaching the limits of politics, where frictions and conflicts start. Radim Žák, regional coordinator for Eastern Europe and Central Asia at the International Centre for Migration Policy Development

One of the best documented and systematic records of the history of migration within the post-Soviet space and beyond its borders, written by a Russian living in Europe who deeply understands the mechanisms both of migration from the newly independent states to Russia and from Russia to the West. Vladislav Inozemtzev, director of the Moscow-based Centre for Research on Post-Industrial Societies, a nonprofit think tank

This book constitutes a unique resource on migration politics of the former Soviet Republics; it is empirically rich and analytically nuanced. Gulina reveals migration as a geopolitical, demographic, and social challenge for the countries in the region. Saidasror Saidov, chief of the Migration Department at the Ministry of Labor, Migration, and Employment of the Republic of Tajikistan

Olga R. Gulina is acting director and founder of RUSMPI, the Institute on Migration Policy in Berlin. She studied constitutional and migration law in Russia, Germany, and France as well as at the Helsinki Human Rights Foundation and European Academy of Diplomacy in Poland. Gulina held fellowships from the German Chancellor Program of the Alexander von Humboldt Foundation and from the Kennan Institute of the Woodrow Wilson Center in Washington, DC. She is author of several books and papers.

Nils Muižnieks was the Council of Europe's Commissioner for Human Rights in 2012–2018, Chairman of the European Commission Against Racism and Intolerance in 2010–2012, and Latvian Minister for Social Integration, Anti-Discrimination, Minority Rights, and Civil Society Development in 2002–2004.