Their African Origin and Global Dispersal 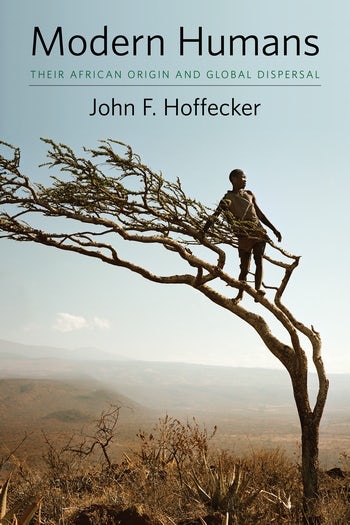 Their African Origin and Global Dispersal

Modern Humans is a vivid account of the most recent—and perhaps the most important—phase of human evolution: the appearance of anatomically modern people (Homo sapiens) in Africa less than half a million years ago and their later spread throughout the world. Leaving no stone unturned, John F. Hoffecker demonstrates that Homo sapiens represents a “major transition” in the evolution of living systems in terms of fundamental changes in the role of non-genetic information.

Modern Humans synthesizes recent findings from genetics (including the rapidly growing body of ancient DNA), the human fossil record, and archaeology relating to the African origin and global dispersal of anatomically modern people. Hoffecker places humans in the broad context of the evolution of life, emphasizing the critical role of genetic and non-genetic forms of information in living systems as well as how changes in the storage, transmission, and translation of information underlie major transitions in evolution. He also draws on information and complexity theory to explain the emergence of Homo sapiens in Africa several hundred thousand years ago and the rapid and unprecedented spread of our species into a variety of environments in Australia and Eurasia, including the Arctic and Beringia, beginning between 75,000 and 60,000 years ago. This magisterial work will appeal to all with an interest in the ever-fascinating field of human evolution.

This is an exceptional book on an inherently interesting topic. Most students of human origins agree that fully modern humans represent the surviving tip of an evolutionary lineage that emerged in Africa, probably beginning at least 300,000 years ago. This was a time when other lineages, including the one that led to the Neanderthals, were evolving in Eurasia. Most specialists also agree that fully modern Africans expanded to Eurasia around 50,000 years ago, where they replaced and sometimes interbred with the Neanderthals and other non-modern people. Much has been written on the ‘Out-of-Africa’ dispersal, but now the emphasis is increasingly on indications that invading Africans acquired some genes from resident Eurasians. Fossils are then valued mostly for their ancient DNA and only incidentally for their form and geographic distribution, while relevant archaeological observations are completely ignored, even though they underlie the most plausible explanations for modern human success. John F. Hoffecker considers everything and ignores nothing, and his synthesis is extraordinary not only for its breadth but for its clarity. Modern Humans will satisfy both curious lay readers and specialists who seek a readily intelligible, authoritative update on where we came from. Richard G. Klein, Anne T. and Robert M. Bass Professor in the School of Humanities and Sciences, Stanford University, author of The Human Career: Human Biological and Cultural Origins, Third Edition

John F. Hoffecker has produced an exhaustively researched but highly accessible account of the evidence—from paleontology, archaeology, material culture, and genomics—for one of the greatest stories ever told: how, from an unremarkable origin in Africa, our species Homo sapiens began behaving in extraordinary and unprecedented ways, and rapidly took over the entire habitable world—with consequences with which we are still grappling. Modern Humans is an invaluable resource for anyone interested in how modern humans came to be the amazing creatures they are. Ian Tattersall, Curator Emeritus, Division of Anthropology, American Museum of Natural History, author of The Strange Case of the Rickety Cossack and Other Cautionary Tales from Human Evolution

Every so often, a benchmark volume is needed to slow things down a bit and walk readers through the evidence, reminding them of what it all means. This is just such a volume, and, happily Hoffecker's writing style makes the evidence come alive for almost all levels of readers, from the lay public to seasoned professionals. Choice

An erudite, meticulously researched, and well-presented account of the Spencerian process as applied to deep history. Clive Gamble, American Antiquity

John F. Hoffecker is a fellow of the Institute of Arctic and Alpine Research at the University of Colorado, Boulder. He has conducted field research in Alaska and Eastern Europe and is the author of Desolate Landscapes: Ice-Age Settlement in Eastern Europe (2002); A Prehistory of the North: Human Settlement of the Higher Latitudes (2005); (with Scott A. Elias) Human Ecology of Beringia (Columbia, 2007); and Landscape of the Mind: Human Evolution and the Archaeology of Thought (Columbia, 2011).