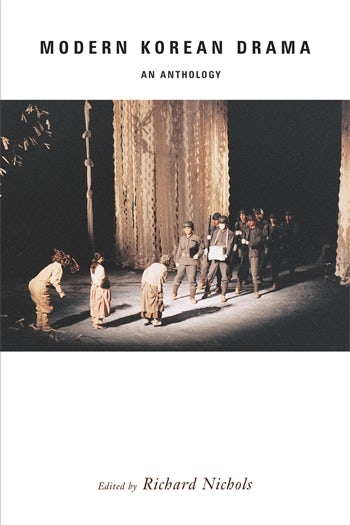 Carefully selected and represented, the plays in this collection showcase both the fantastic and the realistic innovations of Korean dramatists during a time of rapid social and historical change. Stretching from 1962 to 2004, these seven works tackle major subjects, such as the close of the Choson dynasty and the aftermath of the Korean War, while delving into trenchant cultural issues, such as the marginalization of students who rebel against mainstream education and the role of traditional values in a materialistic society.

Longtime scholar of Korea and its vibrant, politically acute theater, Richard Nichols opens with a general overview of modern Korean drama since 1910 and concludes with an appendix describing theater production and audience attendance in Seoul. He chooses works that aren't just for Korean audiences. These texts confront universal themes and situations, tackling the problem of ambition, the trouble with fidelity, and the complexity of sexual and interpersonal relationships.

Nichols situates each work critically, historically, and culturally, including brief biographies of playwrights and extensive notes. A bibliography also provides alternative readings and the titles of additional plays currently available in English. Primed for production, these skillful translations provide Western directors with exciting new material for the stage. At the same time, they offer students and scholars a sophisticated survey of the modern Korean dramatic tradition.

Modern Korean Drama is a long overdue publication for English-speaking readers. These plays, as the editor rightly claims, are truly representative of modern Korean drama written by Korean writers and presented for Korean audiences. Subject matter is drawn from Korean history, culture, wars, and more, yet they are written under the influence of diverse past theaters-traditional Korean performing arts, Western-influenced realism, the Korean version of the theater of cruelty, and the Theater of the Absurd. This publication is an ultimate triumph not only for the authors, translators, editor, and publisher but also for students of Korean drama and potential audiences in English-speaking theater communities. Oh-Kon Cho, State University of New York at Brockport

an invaluable reference for anyone interested in Korean theatre Jan Creutzenberg, Acta Koreana

This text will be useful to those seeking a textbook on Korean modern drama because it includes background and playable, accessible translations. Asian Theatre Journal

Richard Nichols is emeritus professor of theater at Penn State University. A senior Fulbright research scholar in Seoul from 2002 to 2003, Nichols has taught at Korea University, Sungkyunkwan University, and the Korean National University of the Arts. He has published numerous articles on Korean theater and is the cotranslator of Four Contemporary Korean Plays by Lee Yun-Taek.