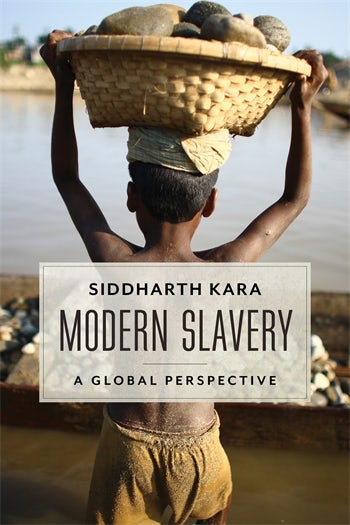 Siddharth Kara is a tireless chronicler of the human cost of slavery around the world. He has documented the dark realities of modern slavery in order to reveal the degrading and dehumanizing systems that strip people of their dignity for the sake of profit—and to link the suffering of the enslaved to the day-to-day lives of consumers in the West. In Modern Slavery, Kara draws on his many years of expertise to demonstrate the astonishing scope of slavery and offer a concrete path toward its abolition.

From labor trafficking in the U.S. agricultural sector to sex trafficking in Nigeria to debt bondage in the Southeast Asian construction sector to forced labor in the Thai seafood industry, Kara depicts the myriad faces and forms of slavery, providing a comprehensive grounding in the realities of modern-day servitude. Drawing on sixteen years of field research in more than fifty countries around the globe—including revelatory interviews with both the enslaved and their oppressors—Kara sets out the key manifestations of modern slavery and how it is embedded in global supply chains. Slavery offers immense profits at minimal risk through the exploitation of vulnerable subclasses whose brutalization is tacitly accepted by the current global economic order. Kara has developed a business and economic analysis of slavery based on metrics and data that attest to the enormous scale and functioning of these systems of exploitation. Beyond this data-driven approach, Modern Slavery unflinchingly portrays the torments endured by the powerless. This searing exposé documents one of humanity’s greatest wrongs and lays out the framework for a comprehensive plan to eradicate it.

Expert. Investment banker. Consultant. Harvard instructor. Researcher. Activist. Screenplay writer. Poet. The author of Modern Slavery delivers horrific news and testimonies with phrases here and there so beautiful that the reader is lifted out of desperation enough to turn the next page. For all my association with the world of slavery, I’ve never known anyone remotely like Siddharth Kara. He grounds the reader through statistics and definitions before launching into scenes more true than any statistic or definition could ever be. No reader, however carefully clad in hyper-rationality, will emerge unchallenged and unchanged. Swanee Hunt, former U.S. Ambassador to Austria

Kara not only harnesses data and economic analysis to expose the ongoing shame of modern slavery, but reveals its underlying humanity—the cruelty of traffickers, the dignity of survivors, and the complicity of consumers. With both academic rigor and passion, Kara challenges us all to confront this global scourge. Luis CdeBaca, former U.S. Ambassador-at-Large to Monitor and Combat Trafficking in Persons

Insightful, awe-inspiring, and hopeful. This book demonstrates the depraved depths to which humanity has sunk in its efforts to extract profit through the exploitation of human beings and highlights the factors that prevent us from making progress with eliminating these practices. Siddharth Kara writes with great love and compassion for survivors of slavery, human and organ trafficking, and forced labor, and his personal stories and insightful analyses force us to renew our commitment to creating a world free of slavery in which human dignity and human rights can triumph once again. A must-read for all those concerned about human rights and labor exploitation. Urmila Bhoola, United Nations Special Rapporteur on Contemporary Forms of Slavery

As we bring big data, analytics, and technology to the fight to end modern slavery, Siddharth Kara is here to hold us all to account on the realities, misery, and savagery of slavery. No one else can serve this powerful and important role. While many in this fight are sympathetic to the suffering, Kara not only brings true expertise, he brings true empathy. Read this book to immerse yourself in both. Jean Baderschneider, CEO, Global Fund to End Modern Slavery

This book provides an overview of the different forms of modern-day slavery, as well as a framework for the eradication of the phenomenon. Siddharth Kara uses case studies to exemplify the cultural norms that perpetuate trafficking and provides an extensive analysis of data through a unique business-model approach. Using a combination of rigorous analysis and anecdotal stories, Kara delves into subfields in modern-day slavery that have rarely been covered. Jennifer Bryson Clark, coeditor of A Global Handbook on Human Trafficking and Modern Day Slavery

Siddharth Kara is a senior fellow and lecturer at the Harvard Kennedy School of Government, a senior fellow at the Harvard School of Public Health, and a lecturer at the University of California, Berkeley. He is the author of Sex Trafficking: Inside the Business of Modern Slavery (2008) and Bonded Labor: Tackling the System of Slavery in South Asia (2012), both from Columbia University Press.