From IQ Measurement to Artificial Brains 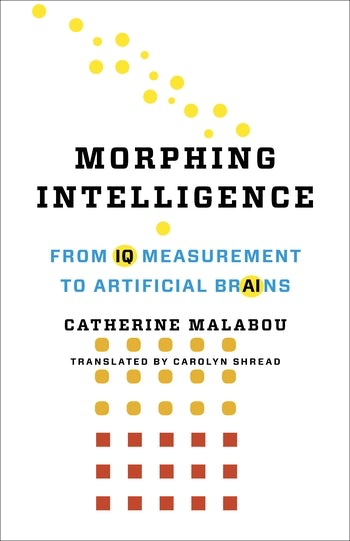 From IQ Measurement to Artificial Brains

What is intelligence? The concept crosses and blurs the boundaries between natural and artificial, bridging the human brain and the cybernetic world of AI. In this book, the acclaimed philosopher Catherine Malabou ventures a new approach that emphasizes the intertwined, networked relationships among the biological, the technological, and the symbolic.

Malabou traces the modern metamorphoses of intelligence, seeking to understand how neurobiological and neurotechnological advances have transformed our view. She considers three crucial developments: the notion of intelligence as an empirical, genetically based quality measurable by standardized tests; the shift to the epigenetic paradigm, with its emphasis on neural plasticity; and the dawn of artificial intelligence, with its potential to simulate, replicate, and ultimately surpass the workings of the brain. Malabou concludes that a dialogue between human and cybernetic intelligence offers the best if not the only means to build a democratic future. A strikingly original exploration of our changing notions of intelligence and the human and their far-reaching philosophical and political implications, Morphing Intelligence is an essential analysis of the porous border between symbolic and biological life at a time when once-clear distinctions between mind and machine have become uncertain.

In this remarkable book Catherine Malabou focuses on the transformations of “intelligence” as it moves from genetics to epigenetics to automatism. Historically grounded, philosophically astute, and engagingly written, this book is highly recommended for anyone interested in intelligence—artificial and natural—and in contemporary configurations of what counts as human. N. Katherine Hayles, author of Unthought: The Power of the Cognitive Nonconscious

Catherine Malabou is one of the rare philosophers who seriously engages contemporary biological research in her explorations of human experience. In this book, she turns her attention to the core question of intelligence, and with spectacular results. At stake is the very future of human thought, and Malabou is led to reflect on machine intelligence for the first time, generating singular insights. As ever, Malabou’s prose is precise and elegant, deftly expressed in Carolyn Shread’s fluid translation. David Bates, author of Plasticity and Pathology: On the Formation of the Neural Subject

Morphing Intelligence contains significant new developments in Malabou’s ongoing work at the intersections of philosophy and the sciences. She moves from her groundbreaking theoretical reflections on neuroplasticity and epigenetics to a philosophical confrontation with the various challenges posed by today’s emerging forms of artificial intelligence. Malabou, with her characteristic clarity and insight, radically redraws the lines between humans and machines, brains and computers. Morphing Intelligence is a major achievement and not to be missed. Adrian Johnston, author of A New German Idealism Hegel, Žižek, and Dialectical Materialism

However, the emergence of radically new forms of intelligence cannot be denied anymore. Morphing Intelligence thus makes us repeat with a sense of urgency Malabou’s original question: what should we do with our brain? The Wire

Translator’s Foreword: Why I Translate So Intelligently: Translation Mètis in the Era of Google Translate
Acknowledgments
Preface
Introduction
1. g: Intelligence and Genetic Fate
2. The “Blue Brain”
3. Like a Pollock Painting
Conclusion
Postscript to the English Translation. Artificial Intelligence: The Fourth Blow to Our Narcissism
Notes
Index

Catherine Malabou is professor of philosophy at the Centre for Research in Modern European Philosophy at Kingston University, London, and of comparative literature at the University of California, Irvine. Her many books include What Should We Do with Our Brain? (2008), Plasticity at the Dusk of Writing (Columbia, 2009), and Before Tomorrow: Epigenesis and Rationality (2016).

Carolyn Shread is lecturer in French at Mount Holyoke College and teaches translation studies at Smith College. Her translations include several works by Catherine Malabou.