Must We Divide History Into Periods? 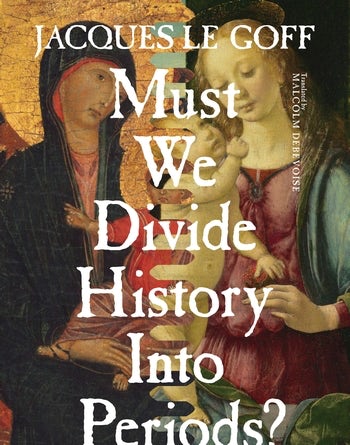 Must We Divide History Into Periods?

We have long thought of the Renaissance as a luminous era that marked a decisive break with the past, but the idea of the Renaissance as a distinct period arose only during the nineteenth century. Though the view of the Middle Ages as a dark age of unreason has softened somewhat, we still locate the advent of modern rationality in the Italian thought and culture of the fifteenth and sixteenth centuries.

Jacques Le Goff pleads for a strikingly different view. In this, his last book, he argues persuasively that many of the innovations we associate with the Renaissance have medieval roots, and that many of the most deplorable aspects of medieval society continued to flourish during the Renaissance. We should instead view Western civilization as undergoing several "renaissances" following the fall of Rome, over the course of a long Middle Ages that lasted until the mid-eighteenth century.

While it is indeed necessary to divide history into periods, Le Goff maintains, the meaningful continuities of human development only become clear when historians adopt a long perspective. Genuine revolutions—the shifts that signal the end of one period and the beginning of the next—are much rarer than we think.

The value of this work lies in its consideration of Western early modern history and its reflection on how we perceive and try to control time. It is a memoir of intellectual landscape by a man who lived with his subject for half a century. Le Goff evokes how the naming of a new period entails the rejection of what precedes; when we decide 'this was the Renaissance,' we cast off a thing called the Middle Ages. Le Goff encourages us to avoid such partitions and appreciate time's continuum Andrea Tarnowski, Dartmouth College

Time occupied Le Goff throughout his long and immensely fruitful career. The qualities of time—liturgical time, market time, peasant time—intrigued him, as did the ways it has been divided, measured, and represented. In Must We Divide History Into Periods?, Le Goff delights his readers with the suggestion that the Renaissance was but one of a series of creative episodes within Europe's long 'Middle Ages,' an epoch whose end is best found in the eighteenth century. Miri Rubin, Queen Mary University of London

Le Goff was one of the truly great historians of our time, and his final reflections on the nature and responsibilities of our craft are lucid, profound, and humane. R. I. Moore, Newcastle University

Acknowledging both the arbitrary nature of historical periodization and its necessity, Jacques Le Goff argued until his death for an appreciation of the fundamental unity of what is normally divided into the Middle Ages and the Renaissance. This final formulation of his arguments will be useful to generations of those who seek to understand the paradox of continuity and change in European history Patrick J. Geary, Institute for Advanced Study

A good book that leaves the reader with interesting questions. Scott McLemee, Inside Higher Ed

Jacques Le Goff (1924–2014), for many years director of studies at the École des Hautes Etudes en Sciences Sociales in Paris, was a highly influential member of the Annales School. Among his other works are Time, Work, and Culture in the Middle Ages and Constructing the Past: Essays in Historical Methodology.

M. B. DeBevoise translates from the French and Italian in every branch of scholarship.