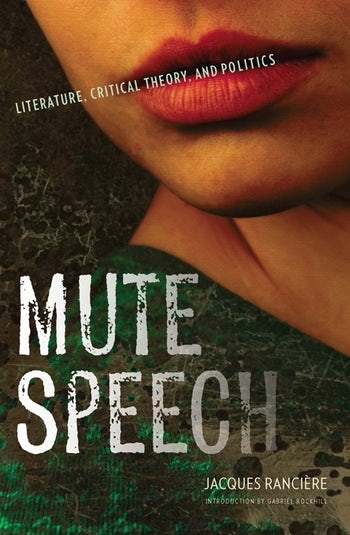 Jacques Rancière has continually unsettled political discourse, particularly through his questioning of aesthetic "distributions of the sensible," which configure the limits of what can be seen and said. Widely recognized as a seminal work in Rancière's corpus, the translation of which is long overdue, Mute Speech is an intellectual tour de force proposing a new framework for thinking about the history of art and literature. Rancière argues that our current notion of "literature" is a relatively recent creation, having first appeared in the wake of the French Revolution and with the rise of Romanticism. In its rejection of the system of representational hierarchies that had constituted belles-letters, "literature" is founded upon a radical equivalence in which all things are possible expressions of the life of a people. With an analysis reaching back to Plato, Aristotle, the German Romantics, Vico, and Cervantes and concluding with brilliant readings of Flaubert, Mallarmé, and Proust, Rancière demonstrates the uncontrollable democratic impulse lying at the heart of literature's still-vital capacity for reinvention.

Ranciere is refreshingly unorthdox in unearthing examples of 'mute speech' not from modernism, but from relatively prosaic realist and naturalist novels. Times Literary Supplement

Although the text does not lend itself to quick, light-hearted reading, it does reward thoughtful consideration. The tensions, paradoxes, and contradictions that characterize poetics and aesthetics are given space to move in this text Jerilyn Sambrooke, Church and Postmodern Culture

Ranciere offers us fresh ways to understand how we got from a system of poetics that organized a number of particular arts, to an aesthetic regime in which it is now possible to speak of art in the singular. TOPIA: Canadian Journal of Cultural Studies

Jacques Rancière (b. 1940) is professor of philosophy emeritus at the University of Paris VIII. Among his major works translated into English are The Future of the Image, The Politics of Aesthetics, The Philosopher and His Poor, The Flesh of Words: The Politics of Writing, Aesthetics and Its Discontents, Disagreement: Politics And Philosophy, and The Ignorant Schoolmaster: Five Lessons in Intellectual Emancipation.

Gabriel Rockhill is assistant professor of philosophy at Villanova University and program director at the Collège International de Philosophie. He is the author of Logique de l'histoire and coeditor of the Politics of Culture and the Spirit of Critique: Dialogues, as well as Jacques Rancière: History, Politics, Aesthetics.

James Swenson is associate professor of French and dean of humanities at Rutgers University. He is the author of On Jean-Jacques Rousseau Considered as One of the First Authors of the Revolution and a well-known translator of Étienne Balibar and Jacques Rancière.