Palestine, 1948, and the Claims of Memory 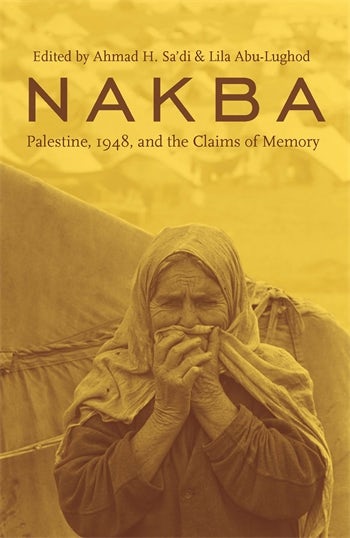 Palestine, 1948, and the Claims of Memory

For outside observers, current events in Israel, Gaza, and the West Bank are seldom related to the collective memory of ordinary Palestinians. But for Palestinians themselves, the iniquities of the present are experienced as a continuous replay of the injustice of the past.

By focusing on memories of the Nakba or "catastrophe" of 1948, in which hundreds of thousands of Palestinians were dispossessed to create the state of Israel, the contributors to this volume illuminate the contemporary Palestinian experience and clarify the moral claims they make for justice and redress.

The book's essays consider the ways in which Palestinians have remembered and organized themselves around the Nakba, a central trauma that continues to be refracted through Palestinian personal and collective memory. Analyzing oral histories and written narratives, poetry and cinema, personal testimony and courtroom evidence, the authors show how the continuing experience of violence, displacement, and occupation have transformed the pre-Nakba past and the land of Palestine into symbols of what has been and continues to be lost.

Nakba brings to light the different ways in which Palestinians experienced and retain in memory the events of 1948. It is the first book to examine in detail how memories of Palestine's cataclysmic past are shaped by differences of class, gender, generation, and geographical location. In exploring the power of the past, the authors show the urgency of the question of memory for understanding the contested history of the present.

Nakba provides crucial insights into the Palestinian-Israeli situation yesterday, today, and, perhaps, tomorrow. This is a voice which needs to be heard by everyone interested in resolving this conflict. Ahdaf Soueif, author of The Map of Love

This is a voice which needs to be heard by everyone interested in resolving this conflict. Palestine News Agency

Essential for anyone interested in testimony and history. Gershom Gorenberg, BookForum

[A] moving collection of writings on the expulsion of the Palestinian people from their homeland in 1948... Highly recommended. CHOICE

The editors... have compiled a collection of impressive contributions that weave together the rich and changing tapestry of Palestinian memories. Randa Farah, H-Levant

List of Illustrations
Acknowledgments
Note on Transliterations
Introduction: The Claims of Memory, by Lila Abu-Lughod and Ahmad H. Sa'di
Part I. Places of Memory
1. The Rape of Qula, a Destroyed Palestinian Village, by Susan Slyomovics
2. Mapping the Past, Re-creating the Homeland: Memories of Village Places in pre-1948 Palestine, by Rochelle Davis
3. Return to Half-Ruins: Memory, Postmemory, and Living History in Palestine, by Lila Abu-Lughod
Part II. Modes of Memory
4. Iterability, Cumulativity, and Presence: The Relations Figures of Palestinian Memory, by Lena Jayyusi
5. Women's Nakba Stories: Between Being and Knowing, by Rosemary Sayigh
6. The Continuity of Trauma and Struggle: Recent Cinematic Representations of the Nakba, by Haim Bresheeth
Part III. Faultlines of Memory
7. The Secret Visitations of Memory, by Omar Al-Qattan
8. Gender of Nakba Memory, by Isabelle Humphries and Laleh Khalili
9. Memories of Conquest: Witnessing Death in Tantura, by Samera Esmeri
10. The Politics of Witness: Remembering and Forgetting 1948 in Shatila Camp, by Diana K. Allan
Afterword. Reflections on Representations, History, and Moral Accountability, by Ahmad H. Sa'di
Bibliography
Contributors
Index

Read the >Introduction to Nakba.