How Science Can Enlighten Us About Spirituality 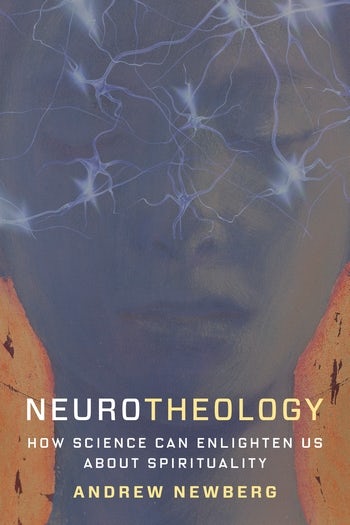 How Science Can Enlighten Us About Spirituality

Religion is often cast in opposition to science. Yet both are deeply rooted in the inner workings of the human brain. With the advent of the modern cognitive neurosciences, the scientific study of religious and spiritual phenomena has become far more sophisticated and wide-ranging. What might brain scans of people in prayer, in meditation, or under the influence of psychoactive substances teach us about religious and spiritual beliefs? Are religion and spirituality reducible to neurological processes, or might there be aspects that, at least for now, transcend scientific claims?

In this book, Andrew Newberg explores the latest findings of neurotheology, the multidisciplinary field linking neuroscience with religious and spiritual phenomena. He investigates some of the most controversial—and potentially transformative—implications of a neurotheological approach for the truth claims of religion and our understanding of minds and brains. Newberg leads readers on a tour through key intersections of neuroscience and theology, including the potential evolutionary basis of religion; the psychology of religion, including mental health and brain pathology; the neuroscience of myths, rituals, and mystical experiences; how studies of altered states of consciousness shed new light on the mind-brain relationship; and what neurotheology can tell us about free will. When brain science and religious experience are considered together in an integrated approach, Newberg shows, we might come closer to a fuller understanding of the deepest questions.

A tour de force in this emerging field, Neurotheology provides a superb review of the science to date and shows the many directions the field may go in the future. This book raises profound implications for neuroscience, medicine, theology, and philosophy. Fascinating and clearly written and accessible for everyone. Truly mind-blowing. Harold Koenig, Duke University Medical Center

This book offers the promise that ‘neurotheology’ can help move us beyond the conflict between science and religion toward the truth or at least to a more unified and universal perspective on the interface between spirituality and the brain. Neurotheology covers many potential points of contact between science and religion, acknowledges the existence of complexity and the dangers of simple reductionism, and presents clear information on the capabilities and limitations of various forms of neurological assessment. John Peteet, Harvard Medical School

In Neurotheology, Andrew Newberg discusses the possibility of a fruitful dialogue between neuroscience and religion and how this sort of investigation may have a profound impact on how we see spirituality, ourselves, and life. A world expert in the neuroimaging study of spiritual experiences, Newberg proposes a nondogmatic approach to the scientific study of spirituality and successfully advocates for fruitful exchanges between science and religion. Alexander Moreira-Almeida, Federal University of Juiz de Fora

A magnificent work! Newberg is a superb scientist, yet still writes for a curious reader or college student an entirely gripping scholarly account. He addresses some of humanity's all-time epic questions of ultimate meaning with systematic, fine grain research that could only be technically possible in the past decade. A true work of scholarship, with rigor, artful synthesis, and a deep bench of knowledge around spirituality and religion. Lisa Miller, Ph.D., Professor and Founder, Spirituality Mind Body Institute, Teachers College, Columbia University

[A] comprehensive look at the field of neurotheology, or the neurology of religion. . . . Given that the larger relationship between science and religion has been contested for centuries, Newberg’s latest evidential support for a scientific understanding of why humans practice religion will be a welcome overview for interested readers. Publishers Weekly

Newberg's book will be of most value to those who are struggling to reconcile science and spirituality. Choice

This is an excellent introduction to the emerging field of neurotheology as well as a concise assessment of the contributions of neuroscience to our understanding of a broad range of religious and spiritual issues. Reading Religion

Andrew Newberg is the director of research at the Marcus Institute of Integrative Health at Thomas Jefferson University Hospital. His books include Why God Won’t Go Away: Brain Science and the Biology of Belief (2001), Why We Believe What We Believe: Uncovering Our Biological Need for Meaning, Spirituality, and Truth (2006), How God Changes Your Brain: Breakthrough Findings from a Leading Neuroscientist (2009), and Principles of Neurotheology (2010).