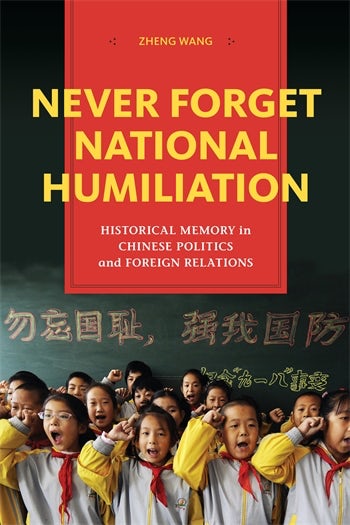 How could the Chinese Communist Party (CCP) not only survive but even thrive, regaining the support of many Chinese citizens after the Tiananmen Square crackdown of 1989? Why has popular sentiment turned toward anti-Western nationalism despite the anti-dictatorship democratic movements of the 1980s? And why has China been more assertive toward the United States and Japan in foreign policy but relatively conciliatory toward smaller countries in conflict?

Offering an explanation for these unexpected trends, Zheng Wang follows the Communist government's ideological reeducation of the public, which relentlessly portrays China as the victim of foreign imperialist bullying during "one hundred years of humiliation." By concentrating on the telling and teaching of history in today's China, Wang illuminates the thinking of the young patriots who will lead this rising power in the twenty-first century.

Wang visits China's primary schools and memory sites and reads its history textbooks, arguing that China's rise should not be viewed through a single lens, such as economics or military growth, but from a more comprehensive perspective that takes national identity and domestic discourse into account. Since it is the prime raw material for constructing China's national identity, historical memory is the key to unlocking the inner mystery of the Chinese. From this vantage point, Wang tracks the CCP's use of history education to glorify the party, reestablish its legitimacy, consolidate national identity, and justify one-party rule in the post-Tiananmen and post–Cold War era. The institutionalization of this manipulated historical consciousness now directs political discourse and foreign policy, and Wang demonstrates its important role in China's rise.

A future world where the Chinese are at peace with their own past seems a long way away. But that is the place, as this useful study of such a difficult area, where we need to get to. Kerry Brown, Asian Review of Books

This work is highly recommended for general readers as well as Asia scholars. It is a must for any serious library collection on Asia. Essential. Choice

A must-read for anyone interested in post-Tiananmen Chinese nationalism. Robert Weatherley, e-IR

A timely and well-researched book, Never Forget National Humiliation qualifies as a landmark in the study of Chinese nationalism. H-Diplo

Zheng Wang is an associate professor in the School of Diplomacy and International Relations at Seton Hall University and a global fellow of the Woodrow Wilson International Center for Scholars.