Muslims and Other Asian Immigrants in American Religious Life 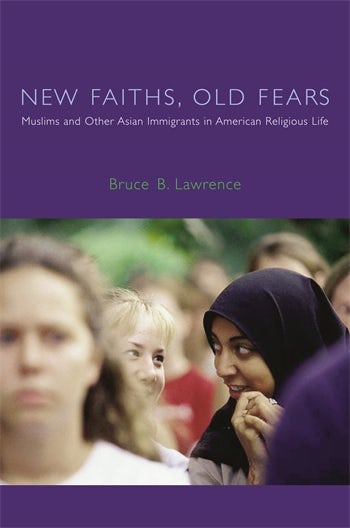 Muslims and Other Asian Immigrants in American Religious Life

As a result of immigration from Asia in the wake of the passage of the 1965 Hart-Celler Immigration Act, the fastest-growing religions in America—faster than all Christian groups combined—are Islam, Hinduism, Buddhism, and Sikhism. In this remarkable book, a leading scholar of religion asks how these new faiths have changed or have been changed by the pluralist face of American civil society. How have these new religious minorities been affected by the deep-rooted American ambivalence toward foreign traditions?

Bruce Lawrence casts a comparativist eye on the American religious scene and explores the ways in which various groups of Asian immigrants have, and sometimes have not, been integrated into the American polity. In the process, he offers several important correctives. Too often, Lawrence argues, profiles of Asian American experience focus exclusively on immigrants from East Asia, to the exclusion of South Asian and West Asian voices.New Faiths, Old Fears seeks to make all Asians equally important and to break free of traditional geographic markers, most reflecting nineteenth-century imperial values, that artificially divide the people of the "Middle East" from the rest of Asia, with whom they share certain religious and cultural ties. Iranian Americans, in particular, emerge as a vital bridge group whose experience tells us much about how Asians of many different backgrounds have found their way in their new nation.

Beyond simply expanding and refining our conception of who Asian Americans are, Lawrence draws instructive comparisons between Asian Americans' experience and those of Native, African, and Hispanic Americans, exposing undercurrents of racial and class antagonisms. He concludes that we cannot fully comprehend the contours and valences of culture and religion in America without understanding how this racialized class prejudice shapes the views of the dominant class toward immigrants and other marginal groups.

a compelling, informed critique and analysis that should provoke citizens to a finer citizenship James L. Peacock, Journal of the American Academy of Religion

an inventive and timely exploration of contemporary American religion, politics, and culture, and exploration that will surely stimulate further research and discussion Karen Leonard, History of Religions

This book not only fills in some key theoretical gaps, but also offers new and hopeful models for conceiving of American diversity. American Journal of Islamic Social Sciences

Bruce B. Lawrence is the Nancy and Jeffrey Marcus Professor of Religion and chair of the department of religion at Duke University. He is the author of many books, including Defenders of God: The Fundamentalist Revolt Against the Modern Age.