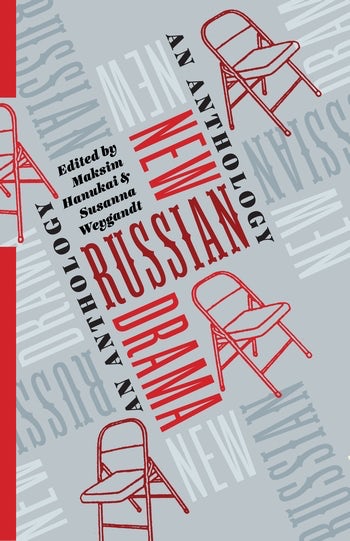 New Russian Drama took shape at the turn of the new millennium—a time of turbulent social change in Russia and the former Soviet republics. Emerging from small playwriting festivals, provincial theaters, and converted basements, it evolved into a major artistic movement that startled audiences with hypernaturalistic portrayals of sex and violence, daring use of non-normative language, and thrilling experiments with genre and form. The movement’s commitment to investigating contemporary reality helped revitalize Russian theater. It also provoked confrontations with traditionalists in society and places of power, making theater once again Russia’s most politicized art form.

This anthology offers an introduction to New Russian Drama through plays that illustrate the versatility and global relevance of this exciting movement. Many of them address pressing social issues, such as ethnic tensions and political disillusionment; others engage with Russia’s rich cultural legacy by reimagining traditional genres and canons. Among them are a family drama about Anton Chekhov, a modern production play in which factory workers compose haiku, and a satirical verse play about the treatment of migrant workers, as well a documentary play about a terrorist school siege and a postdramatic “text” that is only two sentences long. Both politically and aesthetically uncompromising, they chart new paths for performance in the twenty-first century. Acquainting English-language readers with these vital works, New Russian Drama challenges us to reflect on the status and mission of the theater.

Recommended for scholars, theater makers, and readers with a serious interest in world theater. Library Journal

This timely and skillfully edited anthology of plays introduces us to the inventive genius and sheer courage of young dramatists who continue to defy the aesthetic, social, and political conservatism of Putin’s Russia. Julie Curtis, University of Oxford

The early years of this young century sparked an unprecedented flourishing of new writing for the theater in Russia. With abundant theatricality and often mordant wit, these plays represent some of the best and most enduring works from a vital generation of new Russian playwrights. Christian Parker, Columbia University

There has never been a more important moment to stay connected to Russian theater and culture. This rich, comprehensive, and timely anthology offers a vital and inspiring lifeline for scholars, students, theater makers, and the general public alike. Duška Radosavljević, Royal Central School of Speech and Drama, University of London

A whole that is much more than the sum of its parts, this volume brings together a wide range of “texts for performance” that embody and enact a defiantly unruly theatrical sensibility, each rendered in an idiom that makes them legible and compelling to English-language audiences while preserving their provocative strangeness. This is theater that stuns, wounds, and transforms its readers and viewers. The texts gathered and expertly contextualized here offer us an opportunity to imagine and experience word as action, with culture and politics, emotion and ideology coming together to reshape the possibilities of the stage. Boris Wolfson, Amherst College

The ten pieces featured in Maksim Hanukai and Susanna Weygandt’s anthology are not so much plays in the traditional sense, complete with conflict and resolution, as live recordings of twenty-first-century Russian reality: snippets of dialogue framed by text. Anna Aslanyan, Times Literary Supplement

Foreword, by Richard Schechner
Introduction by Maksim Hanukai and Susanna Weygandt
A Chronology of New Russian Drama
1. Plasticine, by Vassily Sigarev
2. Playing the Victim, by the Presnyakov Brothers
3. September.doc, by Elena Gremina and Mikhail Ugarov
4. The Brothers Ch., by Elena Gremina
5. The Blue Machinist, by Mikhail Durnenkov
6. The Locked Door, by Pavel Pryazhko
7. The Soldier, by Pavel Pryazhko
8. Summer Wasps Sting in November, Too, by Ivan Vyrypaev
9. Somnambulism, by Yaroslava Pulinovich
10. Project SWAN, by Andrey Rodionov and Ekaterina Troepolskaya
Notes
About the Authors

Maksim Hanukai is assistant professor of Russian at the University of Wisconsin-Madison.

Susanna Weygandt is visiting assistant professor of Russian at Sewanee: The University of the South.