Elisabeth Bronfen. Translated by the author with David Brenner 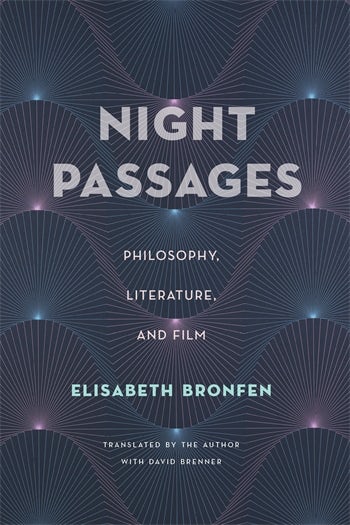 Elisabeth Bronfen. Translated by the author with David Brenner

In the beginning was the night. All light, shapes, language, and subjective consciousness, as well as the world and art depicting them, emerged from this formless chaos. In fantasy, we seek to return to this original darkness. Particularly in literature, visual representations, and film, the night resiliently resurfaces from the margins of the knowable, acting as a stage and state of mind in which exceptional perceptions, discoveries, and decisions play out.

Elisabeth Bronfen investigates the nocturnal spaces in which extraordinary events unfold, and casts a critical eye into the darkness that enables the irrational exploration of desire, transformation, ecstasy, transgression, spiritual illumination, and moral choice. She begins with an analysis of classical myths depicting the creation of the world and then moves through night scenes in Shakespeare and Milton, Gothic novels and novellas, Hegel's romantic philosophy, and Freud's psychoanalysis. Bronfen also demonstrates how modern works of literature and film, particularly film noir, can convey that piece of night the modern subject carries within. From Mozart's "Queen of the Night" to Virginia Woolf 's oscillation between day and night, life and death, and chaos and aesthetic form, Bronfen renders something visible, conceivable, and comprehensible from the dark realms of the unknown.

[A] sprawling meditation on the meanings of the night; it is full of restless, probing insights. Matthew Beaumont, Times Literary Supplement

List of Illustrations
Prologue: My Queen of the Night
Acknowledgments
Introduction: Exile of the Star-Blazing Queen in The Magic Flute
Part I. Cosmogonies of the Night
1. Nyx and her Children
2. "Let there be darkness!"
3. Hegel's Night of the World
4. Freud's Night Side of the Soul
Part II. Night Talks
5. Shakespeare's Night World
6. Freud's Book of Dreams
7. A Poetics of Insomnia
Part III. Gothic Nights
8. Moral Temptations of the Night
9. Seeing the World Darkly
10. Night's Doubles
11. The Nocturnal Flaneur
Part IV. Film Noir's Nights
12. Return of a Hollywood Star
13. Nocturnal Desire of the Femme fatale
14. Into the Night
15. Fate and Chance
Part V. The Ethics of Awakening
16. What Lies at the End of the Night
17. George Eliot's Dawn
18. Edith Wharton's Twilight
19. Virginia Woolf's Nights and Days
Bibliography
Index

Read the chapter, "Return of a Hollywood Star," from Night Passages

Elisabeth Bronfen is professor of English and American studies at the University of Zürich. Her numerous books include Specters of War: Hollywood's Engagement with Military Conflict; Over Her Dead Body: Death, Femininity, and the Aesthetic; The Knotted Subject: Hysteria and Its Discontents; and Home in Hollywood: The Imaginary Geography of Cinema.