Inside the Fight Against Capitalist Mega-Sports in Los Angeles, Tokyo and Beyond 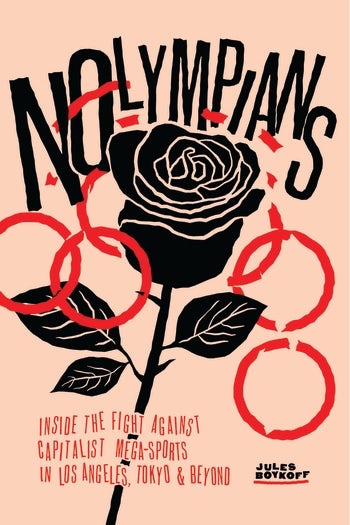 Inside the Fight Against Capitalist Mega-Sports in Los Angeles, Tokyo and Beyond

NOlympians: Inside the Fight Against Capitalist Mega-Sports in Los Angeles, Tokyo and Beyond investigates the intersection of the global rise of anti-Olympics activism and the declining popularity of hosting of the Games. The Olympics were once buoyed by myths of luminous prosperity and upticks in tourism and jobs, but in recent years these assurances have been debunked. Now more than ever, it’s clear that the Olympics have transmogrified into a political-economic juggernaut that arrives with displacement, expanded policing, and anti-democratic backroom deals.
Jules Boykoff – a former professional soccer player who represented the US Olympic soccer team – zooms in on Los Angeles, where the Democratic Socialists of America have launched the NOlympics LA campaign ahead of the 2028 Summer Games. Boykoff shows how DSA-LA’s anti-Olympics activism fits with the resurgence of socialism in the US and beyond.
Boykoff’s research, based on more than 100 interviews with anti-Olympics activists, personal experiences at protests in Los Angeles, Rio de Janeiro, London, and Tokyo, academic research, mass- and alternative-media coverage, and Olympic archives, is the backbone for this story of activists fighting against the odds and embracing the transformative politics of democratic socialism.

“The need for critical writing about the Olympics has never been more important and no one does it more effectively or incisively than Jules Boykoff. Here he shows us not only the potential harm of the LA 2028 Summer Games but the activists who are bringing this reality to light.”

Jules Boykoff is a professor of political science at Pacific University in Oregon, and is the author of Power Games: A Political History of the Olympics; Activism and the Olympics: Dissent at the Games in Vancouver and London; Celebration Capitalism and the Olympic Games; and Beyond Bullets: The Suppression of Dissent in the United States. His writing has appeared in New Left Review, the Guardian, the New York Times, The Nation, Al Jazeera, the Los Angeles Times, Jacobin, and elsewhere.