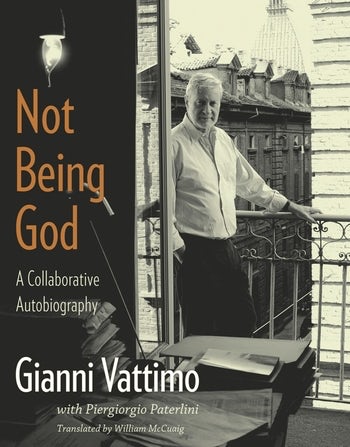 Gianni Vattimo, a leading philosopher of the continental school, has always resisted autobiography. But in this intimate memoir, the voice of Vattimo as thinker, political activist, and human being finds its expression on the page. With Piergiorgio Paterlini, a noted Italian writer and journalist, Vattimo reflects on a lifetime of politics, sexual radicalism, and philosophical exuberance in postwar Italy. Turin, the city where he was born and one of the intellectual capitals of Europe (also the city in which Nietzsche went mad), forms the core of his reminiscences, enhanced by fascinating vignettes of studying under Hans Georg Gadamer, teaching in the United States, serving as a public intellectual and interlocutor of Habermas and Derrida, and working within the European Parliament to unite Europe.

Vattimo's status as a left-wing faculty president paradoxically made him a target of the Red Brigades in the 1970s, causing him to flee Turin for his life. Left-wing terrorism did not deter the philosopher from his quest for social progress, however, and in the 1980s, he introduced a daring formulation called "weak thought," which stripped metaphysics, science, religion, and all other absolute systems of their authority. Vattimo then became notorious both for his renewed commitment to the core values of Christianity (he was trained as a Catholic intellectual) and for the Vatican's denunciation of his views.

Paterlini weaves his interviews with Vattimo into an utterly candid first-person portrait, creating a riveting text that is destined to become one of the most compelling accounts of homosexuality, history, politics, and philosophical invention in the twentieth century.

Not Being God is a pleasurable stroll through one corner of the Italian intellectual world. Commonweal

Gianni Vattimo is emeritus professor of philosophy at the University of Turin and a member of the European Parliament. His books with Columbia University Press are Christianity, Truth, and Weakening Faith: A Dialogue (with René Girard); Art's Claim to Truth; After the Death of God; Dialogue with Nietzsche; The Future of Religion (with Richard Rorty); Nihilism and Emancipation: Ethics, Politics, and the Law; and After Christianity.Piergiorgio Paterlini is a writer and journalist living in Italy and cofounder of the satirical journal Cuore.William McCuaig is also the translator of Gianni Vattimo's Christianity, Truth, and Weakening Faith; Dialogue with Nietzsche; and Nihilism and Emancipation.