On Languaging as a Postcolonial Experience 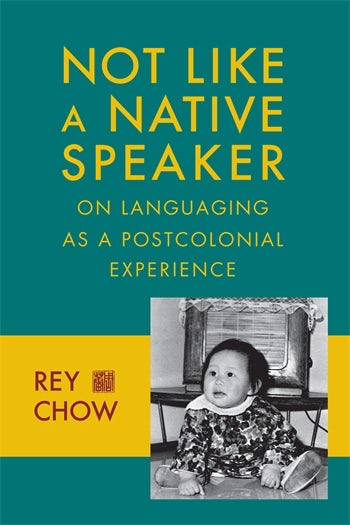 On Languaging as a Postcolonial Experience

Although the era of European colonialism has long passed, misgivings about the inequality of the encounters between European and non-European languages persist in many parts of the postcolonial world. This unfinished state of affairs, this lingering historical experience of being caught among unequal languages, is the subject of Rey Chow's book. A diverse group of personae, never before assembled in a similar manner, make their appearances in the various chapters: the young mulatto happening upon a photograph about skin color in a popular magazine; the man from Martinique hearing himself named "Negro" in public in France; call center agents in India trained to Americanize their accents while speaking with customers; the Algerian Jewish philosopher reflecting on his relation to the French language; African intellectuals debating the pros and cons of using English for purposes of creative writing; the translator acting by turns as a traitor and as a mourner in the course of cross-cultural exchange; Cantonese-speaking writers of Chinese contemplating the politics of food consumption; radio drama workers straddling the forms of traditional storytelling and mediatized sound broadcast.

In these riveting scenes of speaking and writing imbricated with race, pigmentation, and class demarcations, Chow suggests, postcolonial languaging becomes, de facto, an order of biopolitics. The native speaker, the fulcrum figure often accorded a transcendent status, is realigned here as the repository of illusory linguistic origins and unities. By inserting British and post-British Hong Kong (the city where she grew up) into the languaging controversies that tend to be pursued in Francophone (and occasionally Anglophone) deliberations, and by sketching the fraught situations faced by those coping with the specifics of using Chinese while negotiating with English, Chow not only redefines the geopolitical boundaries of postcolonial inquiry but also demonstrates how such inquiry must articulate historical experience to the habits, practices, affects, and imaginaries based in sounds and scripts.

May become one of the classic texts of Anglophone postcolonial studies. Panivong Norindr, University of Southern California

Not Like a Native Speaker reads like a great novel. Through a dazzling array of historical and contemporary scenes, Rey Chow makes yet another invaluable contribution to postcolonial and diaspora studies, this time by taking on the vexing, yet hugely important, issue of "languaging," the racialization of bodies via the loss of native languages or accented speech. She examines the losses and affects that befall subjects who find themselves in the interstices of unequal languages and political economies with the same unflinching honesty and intellectual rigor that her scholarship has accustomed us to. Smaro Kamboureli, Avie Bennett Chair in Canadian Literature, University of Toronto

Rey Chow's book Not Like a Native Speaker is not only a brilliant and original reflection on the fate of language in the afterlife of colonialism, but also an authoritative statement on postcolonial theory; moving beyond the confinement of the politics of identity, it provides a unique map for the postcolonial criticism of the future, one informed by rigor and unafraid of judgment. Simon Gikandi, Princeton University

How does colonial power deploy language?—a central question in postcolonial studies—is infused with new life by Rey Chow in this dazzling book. Chow poses other searching questions concerning identity and estrangement, memory and oblivion, bilingualism and aphasia, and offers acute discussions of language in Fanon, Benjamin, Derrida, Achebe, and Ngugi. Not Like a Native Speaker is provocative and indispensable. Roland Greene, Stanford University

Note on Non-English Sources
Acknowledgments
Introduction: Skin Tones—About Language, Postcoloniality, and Racialization
1. Derrida's Legacy of the Monolingual
2. Not Like a Native Speaker: The Postcolonial Scene of Languaging and the Proximity of the Xenophone
3. Translator, Traitor; Translator, Mourner (or, Dreaming of Intercultural Equivalence)
4. Thinking with Food, Writing off Center: The Postcolonial Work of Leung Ping-kwan and Ma Kwok-ming
5. The Sounds and Scripts of a Hong Kong Childhood
Notes
Index

Rey Chow is Anne Firor Scott Professor of Literature at Duke University and the author of numerous influential books, including several published by Columbia University Press: Primitive Passions; The Protestant Ethnic and the Spirit of Capitalism; and Sentimental Fabulations, Contemporary Chinese Films. A book about her writings, The Rey Chow Reader, was edited by Paul Bowman. Her work has appeared in more than ten languages.