Southern Fiction in the Age of Rock and Roll 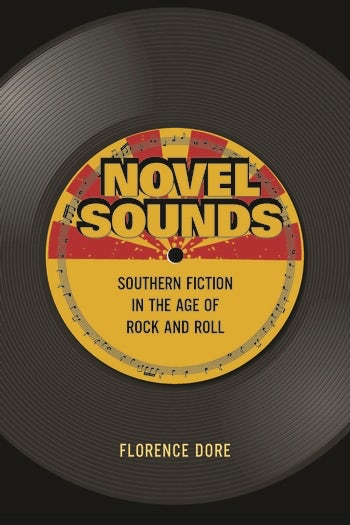 Southern Fiction in the Age of Rock and Roll

The 1950s witnessed both the birth of both rock and roll and the creation of Southern literature as we know it. Around the time that Chuck Berry and Elvis Presley put their electric spin on Southern vernacular ballads, a canonical group of white American authors native to rock’s birthplace began to write fiction about the electrification of those ballads, translating into literary form key cultural changes that gave rise to the infectious music coming out of their region. In Novel Sounds, Florence Dore tells the story of how these forms of expression became intertwined and shows how Southern writers turned to rock music and its technologies—tape, radio, vinyl—to develop the “rock novel.”

Dore considers the work of Southern writers like William Faulkner, Flannery O’Connor, and William Styron alongside the music of Bessie Smith, Lead Belly, and Bob Dylan to uncover deep historical links between rock and Southern literature. Along with rock pioneers, Southern authors drew from blues, country, jazz, and other forms to create a new brand of realism that redefined the Southern vernacular as global, electric, and notably white. Resurrecting this Southern literary tradition at the birth of rock, Dore clarifies the surprising but unmistakable influence of rock and roll on the American novel. Along the way, she explains how literature came to resemble rock and roll, an anti-institutional art form if there ever was one, at the very moment academics claimed literature for the institution.

This is an original and subtle book, with punk-rock ricochets. Greil Marcus

Every chapter of Novel Sounds works at a high and steady pitch of intelligence and cogency. Florence Dore's work teems with rich archival unearthings and interpretive ingenuity. Dore’s intricate connections, juxtapositions, and analyses of multimedia interanimation are never less than absorbing and are often eye-opening both at the level of textual forms and in the larger terms of cultural understanding in which they were embedded. Eric Lott, author of Black Mirror: The Cultural Contradictions of American Racism

Novel Sounds is a brilliantly literary account of rock and roll and American culture. From Lead Belly at the MLA to Bob Dylan’s Nobel Prize, Dore demonstrates how profoundly and unexpectedly entwined our literary histories are with their sonic media. She ensures we’ll never listen to a ballad or read a novel from the era in the same way again. Kate Marshall, University of Notre Dame

In Novel Sounds, Dore is interested in how a mass cultural phenomenon like rock 'n' roll can help illuminate realities about institutionalized high culture. Beginning with the case of Lead Belly, she traces the low and high cultural currents that the folk singer helped set in motion, specifically the mass popularization of Southern black music as 'rock 'n' roll' and the intellectual enthusiasm for folk ballads. Max McKenna, PopMatters

A stimulating addition to the literature on southern American fiction. Choice

Florence Dore is professor of English at the University of North Carolina, Chapel Hill. She is the author of The Novel and the Obscene: Sexual Subjects in American Modernism (2005). Her rock album Perfect City was released on Slewfoot Records (2001).