The Purposes of Philosophy 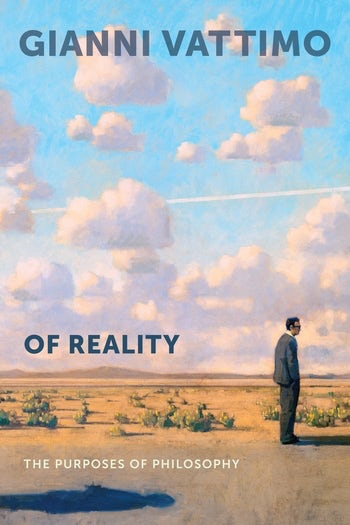 The Purposes of Philosophy

We think it is wise to accept reality, rather than fight for something that does not exist or might never be. But in Of Reality, Gianni Vattimo condemns this complacency, with its implicit support of the status quo. Instead he urges us to never stop questioning, contrasting, or overcoming reality, which is not natural, inevitable, or objective. Reality is a construct, reflecting, among other things, our greed, biases, and tendencies toward violence.

It is no accident, Vattimo argues, that the call to embrace reality has emerged at a time when the inequalities of liberal capitalism are at their most extreme. Developed from his popular Gifford Lectures, this book advances a critical approach that recovers our interpretive powers and native skepticism toward normative claims. Though he recognizes his ideas invite charges of relativism, the philosopher counters with a discussion of truth, highlighting its longstanding ties to history and social circumstance. Truth is always contingent and provisional, and reason and reasonableness are bound to historical context. Truth is therefore never objective, and resistance to reality is our best hope to defeat the indifference that threatens the scope of freedom and democracy.

Of Reality represents the fullness of Vattimo's philosophical journey, which places him at the heart of contemporary European thought. Realistic in the face of our post-metaphysical age, Vattimo's philosophy is rooted in a theological and political vision that should be taken with the utmost seriousness. David Jasper, University of Glasgow

A continuation of his lifelong engagement with Nietzsche and Heidegger, Of Reality provides a reflective summation of Gianni Vattimo's late thinking while also exemplifying a mode of hermeneutical philosophy that is politically engaged without being merely ideological and that is inspired not by the ideals of an unattainable utopia but by the need to stand against enslavement, domination, and suffering. This is a powerful work by one of the major figures in contemporary and twentieth-century philosophy. Jeff Malpas, University of Tasmania

One of the great privileges I've had during my life was to attend Gianni Vattimo's Cardinal Mercier Chair lectures in Leuven and Gifford Lectures in Glasgow. While in the former the Italian philosopher ventured into the effects Nietzsche and Heidegger thought continues to have on philosophy, in the latter he individuated it's new enemy in the twenty-first century: 'new realism.' The return to reality these movement calls for is actually a return to order, in other words, to any alteration of the political and financial order we are submitted to today. Now that these lectures are available, together with new essays, I'm not afraid to describe this book as his magnum opus. Santiago Zabala, ICREA Research Professor at the Pompeu Fabra University

An engaging and refreshing read for any serious student of philosophy. Library Journal

A profound and provocative set of essays. Catholic Books Review

Introduction
Part I. The Leuven Lectures
1. The Nietzsche Effect
2. The Heidegger Effect
3. The Age of the World Picture
Part II. Intermission
4. The Temptation of Realism
Part III. The Gifford Lectures
5. Tarski and the Quotation Marks
6. Beyond Phenomenology
7. Being and Event
8. The Ethical Dissolution of Reality
Part IV. Appendix
9. Metaphysics and Violence: A Question of Method
10. From Heidegger to Marx: Hermeneutics as the Philosophy of Praxis
11. The End of Philosophy in the Age of Democracy
12. True and False Universalism
13. The Evil That Is Not, 1
14. The Evil That Is Not, 2
15. Weak Thought, Thought of the Weak
16. From Dialogue to Conflict
Notes
Index

Gianni Vattimo is emeritus professor of philosophy at the University of Turin and a former member of the European Parliament. His most recent Columbia University Press books include A Farewell to Truth (2011); Hermeneutic Communism: From Heidegger to Marx (with Santiago Zabala, 2011); The Responsibility of the Philosopher (2010); and Art's Claim to Truth (2008), all translated into several languages.