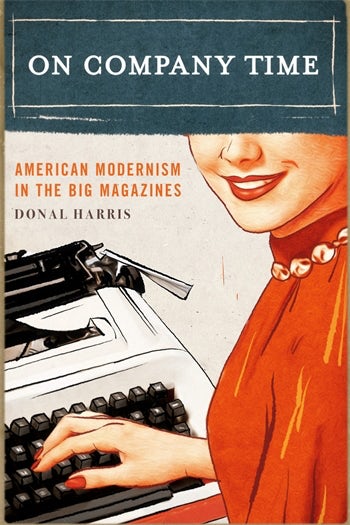 American novelists and poets who came of age in the early twentieth century were taught to avoid journalism "like wet sox and gin before breakfast." It dulled creativity, rewarded sensationalist content, and stole time from "serious" writing. Yet Willa Cather, W. E. B. Du Bois, Jessie Fauset, James Agee, T. S. Eliot, and Ernest Hemingway all worked in the editorial offices of groundbreaking popular magazines and helped to invent the house styles that defined McClure's, The Crisis, Time, Life, Esquire, and others. On Company Time tells the story of American modernism from inside the offices and on the pages of the most successful and stylish magazines of the twentieth century. Working across the borders of media history, the sociology of literature, print culture, and literary studies, Donal Harris draws out the profound institutional, economic, and aesthetic affiliations between modernism and American magazine culture.

Starting in the 1890s, a growing number of writers found steady paychecks and regular publishing opportunities as editors and reporters at big magazines. Often privileging innovative style over late-breaking content, these magazines prized novelists and poets for their innovation and attention to literary craft. In recounting this history, On Company Time challenges the narrative of decline that often accompanies modernism's incorporation into midcentury middlebrow culture. Its integrated account of literary and journalistic form shows American modernism evolving within as opposed to against mass print culture. Harris's work also provides an understanding of modernism that extends beyond narratives centered on little magazines and other "institutions of modernism" that served narrow audiences. And for the writers, the "double life" of working for these magazines shaped modernism's literary form and created new models of authorship.

On Company Time alters forever an old story about literary modernism by showing that writers did not just take a paycheck from the big magazines. This rich and substantial consideration of the complex relations between major writers and mass-market publications shows how several modern styles were developed in collaboration by the magazines and the writers they employed. Donal Harris's account of this collaboration expands our notions of what American writing is and changes the history of how it came to be. Michael North, author of Novelty: A History of the New

Writing in response to both classic and recent scholarship that represents modernism as an insulated coterie endeavor, Harris convincingly and compellingly establishes that modernist authors were engaged with and appeared in mainstream magazines from the start. On Company Time enriches and expands our understanding of the dialectic between modernism and mass culture, revealing that what has frequently been seen as an antagonistic relationship was really a close collaboration that determined both the career arcs of major modernist authors and the design of mainstream magazines. Elegantly written and exhaustively researched, On Company Time is an eminent example of the new modernist studies. Loren Glass, author of Counterculture Colophon: Grove Press, the Evergreen Review, and the Incorporation of the Avant-Garde

Harris's fascinating On Company Time is the book we have been waiting for to help us think through the significance of the commercially popular 'big magazines' that dominated the print-cultural landscape of modernity. Guiding us through magazine offices and showing us print technologies, publishing strategies, and periodical styles along the way, Harris deftly traces the mutual influence of modernism and the commercial magazines. Compelling, imaginative, and entertaining, this book provides an exhilarating new view of modern print culture. Barbara Green, University of Notre Dame, coeditor of the Journal of Modern Periodical Studies

Drawing our attention to a set of major institutions that have until now remained hidden in plain sight of recent cultural history, On Company Time makes an extraordinarily rich and persuasive contribution to the study of American literary modernism. It is also a work of relentlessly lively intelligence and writerly charm. Mark McGurl, author of The Program Era: Postwar Fiction and the Rise of Creative Writing

A welcome addition to the fields of periodical and New Modernist studies, particularly in its consideration of modernism’s vexed relationship with the mainstream. . . . Lucidly written and ambitious. Journal of American Studies

Literary critics and magazine scholars alike should find merit in On Company Time. Scholars passionate about the history of magazine media will appreciate Harris’s research and relish details relevant to the development of the industry. Catherine Staub, Journal of Magazine Media

A nuanced and provocative study. . . . On Company Time offers new perspectives on some of the twentieth century’s most important writers and their relationship with some of the period’s most storied publications. J-History

On Company Time illuminates the intersections between American literature and journalism in the decades that witnessed the professionalization of both fields. American Periodicals: A Journal of History & Criticism

Donal Harris is associate professor of English and director of the Marcus Orr Center for the Humanities at the University of Memphis.