On the Parole Board 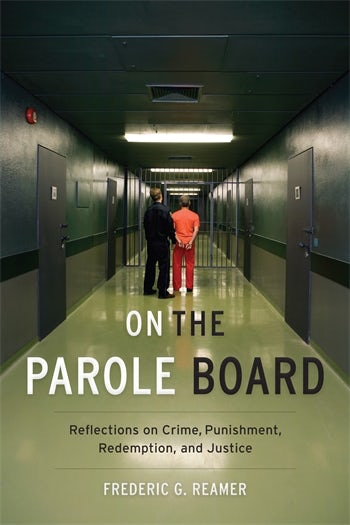 On the Parole Board

Few people experience life inside of prison. Even fewer are charged with the formidable responsibility of deciding whether inmates should be released. In his twenty-four years on the Rhode Island Parole Board, Frederic G. Reamer has judged the fates of thousands of inmates, deciding which are ready to reenter society and which are not. It is a complicated choice that balances injury to victims and their families against an offender's capacity for transformation.

With rich retellings of criminal cases—some banal, some brutal—On the Parole Board is a singular book that explains from an insider's perspective how a variety of factors play into the board's decisions: the ongoing effect on victims and their loved ones, the life histories of offenders, the circumstances of the crimes, and the powerful and often extraordinary displays of forgiveness and remorse. Pulling back the curtain on a process largely shrouded in mystery, Reamer lays bare the thorny philosophical issues of crime and justice and their staggering consequences for inmates, victims, and the public at large. Reamer and his colleagues often hope, despite encountering behavior at its worst, that criminals who have made horrible mistakes have the capacity for redemption. Yet that hope must be tempered with a realistic appraisal of risk, given the potentially grave consequences of releasing an inmate who may commit a future crime. This book will appeal to anyone interested in the complexities of the criminal justice system, the need to correct its injustices, and the challenges of those who must decide when justice has been served.

On the Parole Board is an excellent book and opens up the black box of parole hearings to the public. But more than simply describing the procedures followed in conducting a hearing (which he does incredibly well), Frederic G. Reamer puts a personal face on the process. Joan Petersilia, Adelbert H. Sweet Professor of Law, Stanford Law School

As both a social worker and a parole board member, Reamer offers an insider's view into prisons and the work of a parole board. Brief case histories help provide real-world insight into the back end of the criminal justice system. Howard Abadinsky, author of Probation and Parole: Theory and Practice

Reamer has brought a lens of humanity to both inmates and their victims. This book is a must-read for anyone interested in the U.S. penal system and those often forgotten in its wake. Edward Latessa, professor and director, School of Criminal Justice, University of Cincinnati

Reamer combines a comprehensive overview of the criminal justice system with a generous and deeply personal account of crime's human impact. Publishers Weekly

Preface
Note to Readers
1. Getting Started
2. Goodness and Evil
3. On Being a Victim
4. Punishment, Retribution, and Shame
5. Redemption and Hope
6. The Pursuit of Justice
Notes