In Search of Big Cat Origins 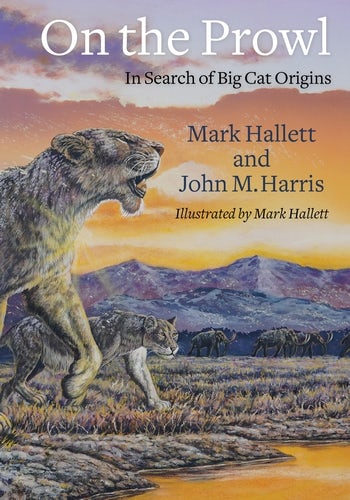 In Search of Big Cat Origins

Big cats such as lions, tigers, leopards, and jaguars fascinate us like few other creatures. They are enduring symbols of natural majesty and power. Yet despite the magnetic appeal of the big cats, their origins and evolutionary history remain poorly understood—and human activity threatens to put an end to the big cats’ glory.

On the Prowl is a fully illustrated and approachable guide to the evolution of the big cats and what it portends for their conservation today. Mark Hallett and John M. Harris trace the origins of these iconic carnivores, venturing down the evolutionary pathways that produced the diversity of big cat species that have walked the earth. They place the evolution and paleobiology of these species in the context of ancient ecosystems and climates, explaining what made big cats such efficient predators and analyzing their competition with other animals. Hallett and Harris pay close attention to human impact, from the evidence of cave paintings and analysis of ancient extinctions up to present-day crises. Their engaging and carefully documented account is brought to life through Hallett’s detailed, vivid illustrations, based on the most recent research by leading paleontologists. Offering a fresh look at the rise of these majestic animals, On the Prowl also makes a powerful case for renewed efforts to protect big cats and their habitats before it is too late.

On the Prowl is a superb book, both enjoyable and instructive. I’m greatly impressed with the huge amount of data that Hallett and Harris have collected and presented in a most readable manner. The complex evolutionary history and relationships of the cats will keep researchers arguing for years. George Schaller, senior conservationist, Wildlife Conservation Society, and author of The Serengeti Lion: A Study of Predator-Prey Relations

On the Prowl brings together biological and paleontological research related to the origins and history of the big cats, with an original emphasis on Asiatic data, paying homage to their majesty, dignity, and beauty. Mark Hallett’s artwork has succeeded brilliantly in capturing their inner spirit and character, their vulnerability and vitality. This book will serve the noble goals of making people aware of the fragility of ecosystems and revealing the moral obligation to preserve and protect extant species. Christine Argot, research professor and curator of collections, Muséum National d’Histoire Naturelle

Hallett and Harris guide the reader on a 20-million-year tour of predator and prey evolution, using environmental change as an engine for adaptation and extinction. The narrative is engaging, spiked with a touch of controversy, and supported by superb illustrations. For those interested in the evolutionary origins of big cats, On the Prowl would be a valuable addition to your library. Christopher Shaw, Idaho Museum of Natural History

Acknowledgments
Preface
1. Threads in the Fabric of Time
2. Anatomy of a Hunter
3. A Breath of Frost
4. Beyond the Distant Horizons
5. Testimony of the Caves
6. Aftermath of an Ice Age
7. Man the Destroyer
8. The Steeds of Durga
Appendix 1: Distribution of Pantherins and Other Felids in Geologic Time
Appendix 2: Pantherin Dispersals Across the World
Appendix 3: Taking Action
Appendix 4: Species of the Genus Panthera
Glossary
Sources
Suggested Reading
Index

Mark Hallett is a naturalist, scientific artist, and author who specializes in prehistoric animals and their environments. His art and writing have appeared in Life, Smithsonian, and National Geographic. He is coauthor of Seismosaurus: The Earth Shaker (Columbia, 1994) and The Sauropod Dinosaurs: Life in the Age of Giants (2016), among other works.

John M. Harris is chief curator emeritus at the Natural History Museum of Los Angeles County and visiting associate in geology at the California Institute of Technology. He is coeditor of Laetoli: A Pliocene Site in Tanzania (1987) and Lothagam: The Dawn of Humanity in Eastern Africa (Columbia, 2013).