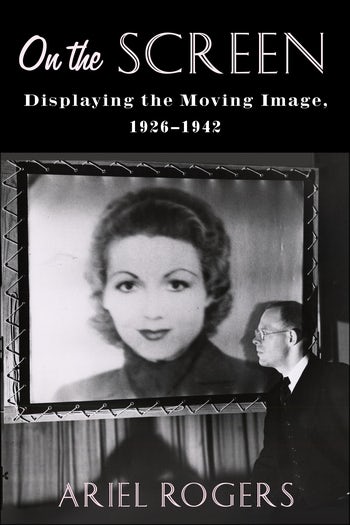 Today, in a world of smartphones, tablets, and computers, screens are a pervasive part of daily life. Yet a multiplicity of screens has been integral to the media landscape since cinema’s golden age. In On the Screen, Ariel Rogers rethinks the history of moving images by exploring how experiments with screen technologies in and around the 1930s changed the way films were produced, exhibited, and experienced.

Marshalling extensive archival research, Rogers reveals the role screens played at the height of the era of “classical” Hollywood cinema. She shows how filmmakers, technicians, architects, and exhibitors employed a variety of screens within diverse spaces, including studio soundstages, theaters, homes, stores, and train stations. Far from inert, screens served as means of structuring mediated space and time, contributing to the transformations of modern culture. On the Screen demonstrates how particular approaches to the use of screens traversed production and exhibition, theatrical and extratheatrical practice, mainstream and avant-garde modes, and even cinema and television. Rogers’s history challenges conventional narratives about the novelty of the twenty-first-century multiscreen environment, showing how attention to the variety of historical screen practices opens up new ways to understand contemporary media.

There is no other book remotely like this. On the Screen is original in the material it unearths and discusses, offering an innovative history of film and technology. It strikes an easy balance between big ideas and focused analysis, addressing unmapped screen dynamics as crucial elements of cinema. Haidee Wasson, author of Museum Movies: The Museum of Modern Art and the Birth of Art Cinema

Offering an extensive and systematic exploration of screen practices in the 1930s, Ariel Rogers recharacterizes this seemingly solid, coherent era by analyzing its multiplicity and heterogeneity. The screen becomes a kaleidoscopic reality. Francesco Casetti, author of The Lumière Galaxy: Seven Key Words for the Cinema to Come

Film theory's classic question "What is cinema?" often gets a (stereo)typical answer around the idea that movies exist when projected on standard screens in theaters. With her well-known and lauded attention to archival research, Ariel Rogers revises this received account of cinema and essentially rewrites it from the ground up. This is a rich and rewarding study that combines sharp scholarship with compelling new interpretation to change the field. Dana Polan, New York University

Ariel Rogers is associate professor in the Department of Radio/Television/Film at Northwestern University. She is the author of Cinematic Appeals: The Experience of New Movie Technologies (Columbia, 2013).